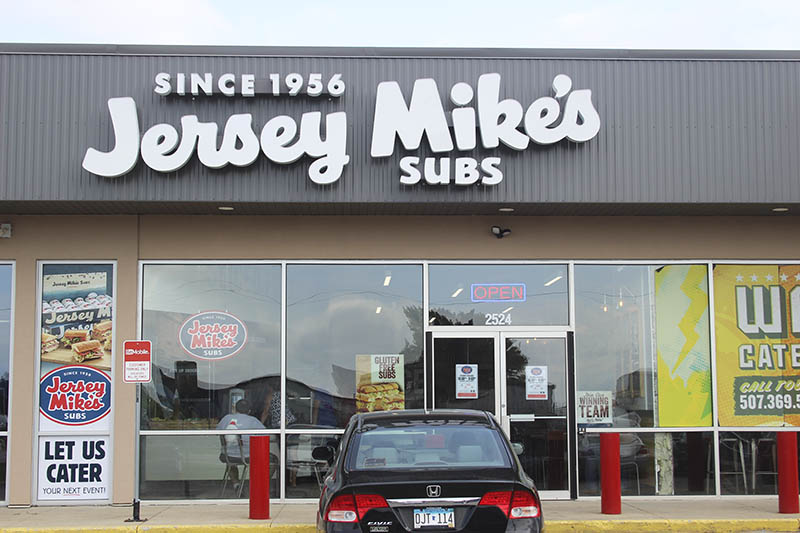 Subway and Erbert and Gerbert’s are sub shops in the area.

Now add Jersey Mike’s to the list after the submarine sandwich shop chain, which has been around since 1956, opened at 2524 Bridge Ave. in front of North Bridge Mall last Wednesday.

Kunst said he thought Albert Lea was a good market and would serve a need. The space on Bridge Avenue was the only area he considered.

So far, he said the experience was great, and noted how well the area supported the business.

“A lot of people, when they travel, mentioned they’re from Albert Lea [and] we really needed a store down here,” he said. “We just started looking for a location, and we were able to find one. And it’s been great.”

The decision to operate in Albert Lea happened about two years ago, and when they saw the location was available they decided to buy the space.

“It just takes time with the landlord, some of the building permits, different things like that, working with the landlord just basically to finalize the lease and get the space ready to open.” he said.

Kunst described Albert Lea, located at the intersection of interstates 35 and 90, as a growing area that had good traffic. The area also provided great visuals for drivers passing through.

He described Albert Lea as a “great, ” “older” and “established”  community and said Jersey Mike’s was a very community-involved company.

“We opened up with a fundraiser for the Albert Lea High School,” he said.

According to Kunst, what made Jersey Mike’s different then other sandwich chains was the company’s emphasis on freshness.

“All of our produce is cut fresh daily in the store from the onions, the lettuce, the tomatoes,” he said. “Our bread is cooked fresh daily, bacon cooked on our flat-top grill daily and then every sub is sliced fresh to order or grilled fresh to order.”

So far, he said community reaction was positive.

The store currently employs 14 people, but Kunst said the store will eventually employ 20 to 25 and would like to provide opportunities for both high school students as well as community residents.