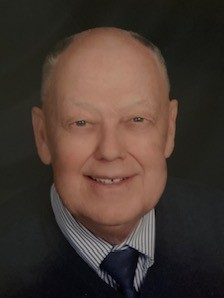 A Celebration of Life will be held at 11:00AM Friday, September 23, 2022, at Redeemer Lutheran Church,  1410 W Boston Ave, Indianola, IA 50125, with Pastor Lisa Parker & Pastor Phil Elmer officiating. A luncheon  at the church will immediately follow the service.

The Family suggests in lieu of flowers, memorial contributions can be made in Terry’s memory to the Solon  Fire Department at 131 N Iowa St, Solon, IA 52333.

Terry started his insurance/financial career with Metropolitan Life in  July of 1964 in Albert Lea. In December of 1967, he and his family moved to Mankato MN, where he was  promoted to management for the Met Life Company. In October of 1975, he accepted the Branch Manager  position in Cedar Rapids IA. In 2016, Mass Mutual bought the Met Life Sales force and he continued  advising/selling until his retirement in September of 2021. An amazing career of 57+ Years!

Terry and Karen lived at their home on the Lake MacBride Golf Course in Solon IA for 45+ Years. He  enjoyed golfing and was an avid sports fan of the Minnesota Vikings, Minnesota Twins, and Iowa Hawkeyes.  He also enjoyed socializing with his clients, friends, and neighbors. He liked watching Elvis Presley and Clint  Eastwood movies. But most of all he loved spending quality time with his wife and family. Terry always  looked forward to helping his daughter with her Avon stores and being a chaperone for high school TSA and  VEX Robotic Competitions with his son. Terry and Karen moved to Indianola IA in July of 2021.

Terry is survived by his wife Karen and two children: Daughter Susan (Dean) Eggers of Indianola IA and  their children Alecia (Zachary) Kaczmarek of Indianola IA, Jacob (Sarah) Eggers of Grimes IA; and Son  “Chip” Terry Jr (Jacqueline) Cotton of Prescott Valley AZ and their children Jocelyn (Philip) Elmer of  Glendive MT, Maxwell (Victoria) Cotton of Belews Creek NC; and nine great-grandchildren. Terry is also  survived by siblings Durk (MaryAnn) Cotton, Robert (Patricia) Cotton, along with numerous nieces,  nephews, cousins, and a host of friends and loved ones. He was preceded in death by his parents.