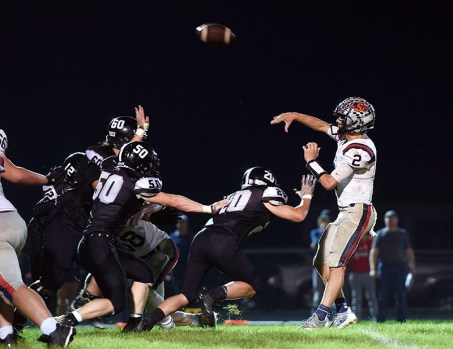 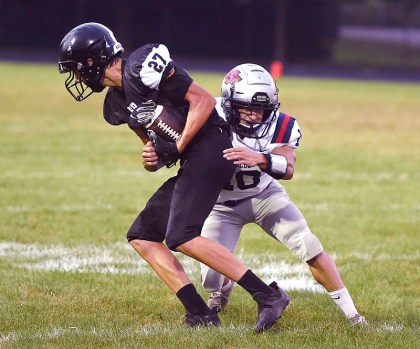 United South Central’s Nathaniel Clore zeroes in on a tackle of Blooming Prairie’s Derek Kubicek during the first half Friday night in Blooming Prairie. Eric Johnson/photodesk@austindailyherald.com 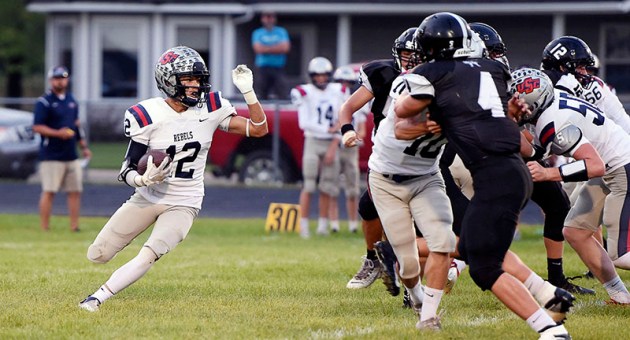 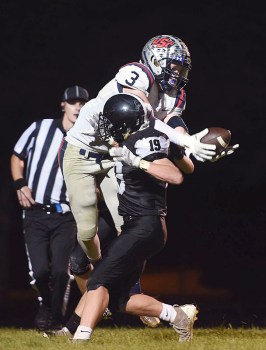 BLOOMING PRAIRIE — The Blooming Prairie football team put its ground game into high gear as it amassed over 300 rushing yards in a 53-20 win over United South Central (1-2 overall) at McFarlin Field Friday night.

Sophomore Cole Wangen ran for 120 yards and three scores and he also put an exclamation mark on the win as he ran behind excellent blocking for a 33-yard TD on a screen pass late in the game. BP senior Sam Pirkl was one of the bulldozers who was clearing a path for Wangen all night long.

BP held a two-score lead in the second quarter when USC was finally able to get on the board on a Jonathan Martinez 85 kick return to make it 14-6. BP answered before USC struck again when Nathaniel Clore scored on a 36 pass from quarterback Nicholas Bushlack to make it 20-14.

While BP’s offense was rolling, its defense had some struggles as the Rebels made some big plays to hang around early in the game. Cade Christianson, who is one of three senior captains on a young BP team, said the team will have to get on the same page.

“There are a lot of eyes on us seniors and we’ve got to do the right thing each and every day,” Christianson said. “We need discipline and all 11 guys need to do their job at the same time. One guy takes a break, that leaves a hole and then we get hurt.”

The Awesome Blossoms (2-1 overall) scored on all four of their first half possessions as Wangen had a pair of short TD burts, Cade Christianson had a 21-yard TD run and Brady Kittelson hit Derek Kubicek for a 14-yard TD pass in the back of the end zone with 21 seconds left in the first half.

“We didn’t really get stopped in the run game,” Christianson said. “We kind of just ran all over them. I was kind of hoping we could pass more, but this was fun too.”

Kittelson had to chase down three loose snaps on BP’s opening 82-yard TD drive, but all three of those plays ended in positive yards.