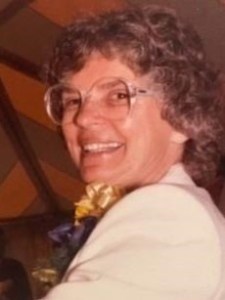 Mary was born on May 2nd, 1930, in Albert Lea, Minnesota, the second of three children to Louis and Elisabeth Ehrhardt. She was a middle child, sandwiched between her older brother George and her younger sister Elisabeth. Mary’s childhood was spent in Albert Lea, surrounded by the family’s seed house business. She then first attended Carleton College before transferring to University of Michigan, where she received her bachelor’s in 1952. It was in Ann Arbor, Michigan where, standing at a bus stop after getting her wisdom teeth pulled, Mary met Douglas Alan Person. This was the start of their partnership together: a life that brought them four children, a bustling home in Santa Cruz, and a broad community of friends.

From the beginning, Mary and Doug had a shared sense of opportunity and adventure they ingrained in their children through extensive global travels. In her everyday life, Mary stayed busy and purposeful: she first trained as an elementary teacher and later received her nursing degree from Cabrillo College. Through it all, she was a devoted homemaker and mother to her four great loves – Cathy, Brian, Carolyn, and Martha. Her Christian faith was a core value throughout Mary’s life. She would attend ANY church for worship, including membership at Twin Lakes Baptist Church, Christian Life Center, and Freedom House. It was at the Christian Life Center where Mary met her second husband, Henning Moe in the summer of 1986. As devout followers of Jesus, Henning and Mary found love and purpose together. They completed many ministry trips focused on the mission of spreading community, prayer and faith including Israel, Japan, the Philippines, China, and Romania. Mary’s faith was her foundation and helped her handle life’s many adversities with acceptance and grace, including the loss of her husband Doug in 1980, her daughter Cathy in 2008, her late husband Henning in 2009, and her vision impairment since 2003.

In her 92 years, Mary never met a stranger. She opened her heart – and her home – to all, with an unparalleled sense of generosity and love. Mary found joy in being able to provide for others in their moments of need. She also found joy in the more mundane, everyday moments, with a mischievous sense of humor and boundless wit. To her very last moments, she was ready with both a wisecrack and the drive to beat you at the crossword table. Her sense of love and devotion to her large and growing family stayed steady and enduring – she religiously wrote and mailed creative birthday and holiday poems to her children, grandchildren, and extended family members using Sharpie and colored stationary.

Mary is preceded in death by her parents, Elisabeth and Louis, her first husband Doug, her second husband Henning, her brother George, her daughter and son-in-law Cathy and Alan Paeth, and her grandson Scott Paeth.

She is survived by her sister Elisabeth, her children Brian, Martha, and Carolyn, her stepdaughter Sheila Bryant, and her 15 grandchildren and 8 great grandchildren.

A celebration of life will be held at 1pm on October 22nd, 2022, at Peace United Church of Christ at 900 High Street in Santa Cruz with a reception following at the nearby family home.