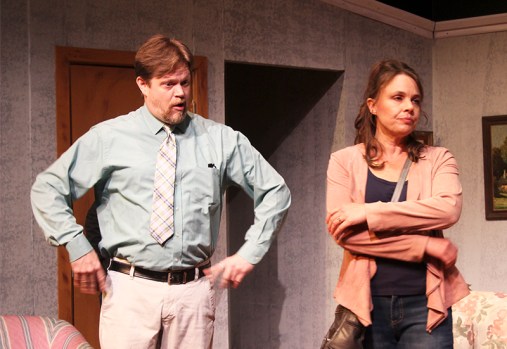 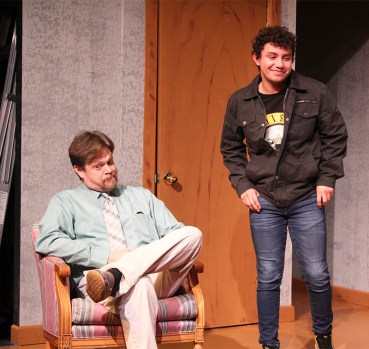 "George" and "Eric" share a moment during a scene of "The Big Five-Oh" in rehearsals. Alex Guerrero/Albert Lea Tribune 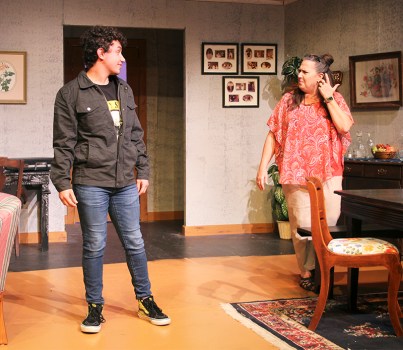 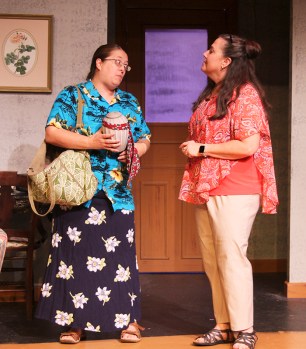 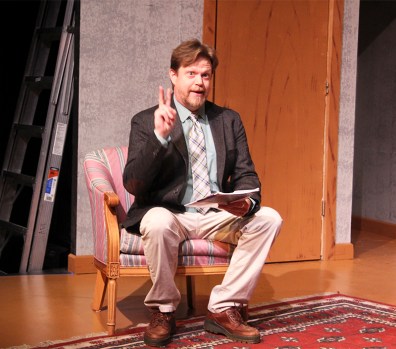 "The Big Five-Oh" tells the story of a man about to turn 50 and dealing wiht both an unemployed son and a daughter getting engaged to a much older man with a family. Alex Guerrero/Albert Lea Tribune 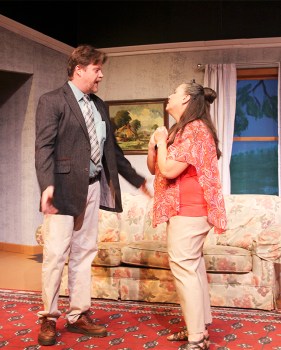 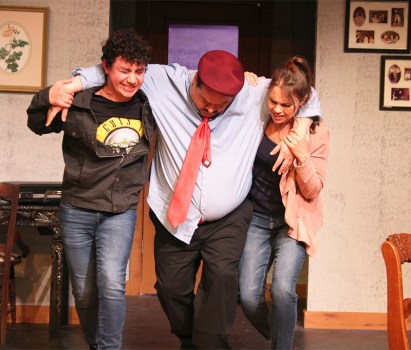 The Thomas siblings help Julie's fiance to the couch during rehearsal of "The Big Five-Oh." Alex Guerrero/Albert Lea Tribune

“It was chosen as a play by the board (of directors) last year at the planning session for a couple reasons,” said Director Rory Mattson. “They kind of liked the play, and it’s an interesting spoof on comedy.”

Written by Brian Mitchell, a native of Rochester, the play tells the story of three days in one man’s life.

“He’s about to have his 50th birthday and all kinds of things happen to him in this short period of time,” he said. “His young daughter gets engaged to a much older man who has a family, his young son doesn’t seem to be able to find a job or work in anything except music, and the characters in the play were so strongly written I think it really appealed to me.”

He described the strength of the characters as fun and called “The Big Five-Oh” a “well-written” work.

He also didn’t feel there was anything particularly challenging about directing this play, and said rehearsals were going “excellent” with a hard-working cast that cared about the roles they had.

“Sometimes in musicals or a play with a huge cast you get some people that are into it and some that are a little less into it,” he said. “These people are all really sold on this.”

There are seven actors in the play.

So far, he noted one of the most difficult aspects of directing the play was having the cast show up for rehearsals on time. At the same time, he thought directing them was easy because they listen to his direction.

Most importantly, he wants the audience to see the message that getting older was not easy.

Hanna, who is from Albert Lea, will play the role of Sara Donavan, who she described as the main character’s student.

“I kind of play her as a shy person I guess,” she said

This will be her first time performing outside of a school production of “Mamma Mia!”

“An old teacher of mine that I’m friends with asked me if I wanted to be in it after the auditions were done, and I figured I haven’t been in a show here before so [I] might as well,” she said.

Supalla, on the other hand, had plenty of experience on stage at ACT.

She had been in eight plays at ACT prior to this one, and had roles in “Doublewide, Texas,” “The Foreigner,” and “Rumors,” amongst others.

Supalla will play Julie, a character she described as strong-willed who seeks her parents’ approval while “doing her own thing.”

“He’s very quirky, not the smartest guy, but he always means well, and he’s really into music,” he said. “I know he kind of messes with his dad a lot throughout the play.”

Prior to the show, he was involved in ACT’s production of ”Beauty and the Beast.”

“The Big Five-Oh” is four acts long, and Mattson said the play typically runs between 80 to 90 minutes. The play will be performed Sept. 29 through Oct. 2 and Oct. 5 through 8. All shows will start at 7:30 p.m., except for the Oct. 2 matinee, which starts at 2 p.m. Tickets are $15 for adults, $10 for students and can be purchased by calling 1-877-730-3144, visiting actonbroadway.com or by calling the box office. Tickets are also available for sale at the Albert Lea Convention and Visitors Bureau.

Mattson said his first time directing for ACT was almost 50 years ago, and believed he directed over 40 productions throughout the years with two or three of those being through ACT.

Mattson actually graduated from the same high school as Mitchell.