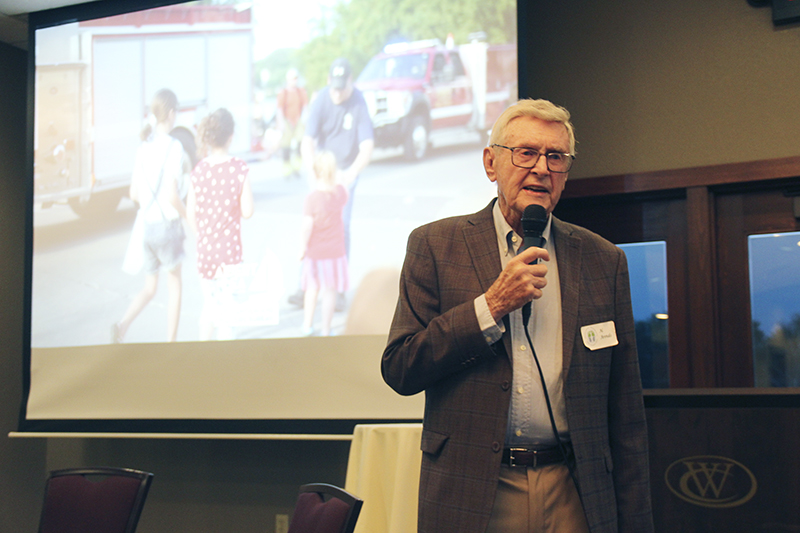 Al Arends speaks Thursday evening to a group at Wedgewood Cove Golf Club about a new legacy program that has been developed. Sarah Stultz/Albert Lea Tribune

A group of local residents unveiled a new legacy program Thursday set up to help people leave a permanent impact on the Albert Lea community.

During a presentation at Wedgewood Cove Golf Club, Al Arends said the idea originated as he reflected on what makes Albert Lea a great place to live.

He said he moved to the city in 1967 and has since then had many who have come to visit, even from neighboring communities, who comment on the beauty of the city.

“You could go on and on about Albert Lea and its beauty, but that isn’t the thing that makes Albert Lea a great place to live,” he said.

He shared instances when businessmen in the community have come together to raise funds when there were problems or to fill gaps in other funding efforts.

“When you have a problem in Albert Lea, it’s the people who step forward,” Arends said.

Albert Lea — including both current and former residents — has time and time again raised money to support efforts, such as with the hospital, the new MercyOne clinic, the Albert Lea Family Y and others.

“I can go on and on about people who step up to the plate,” he said.

That “patriotism to Albert Lea” led them to the idea for the legacy fund, which is centered around three needs vital to every city: an intensive and motivational education system, a vibrant health care infrastructure and a productive and growing business community.

The Permanent Footprints for Albert Lea program requires a minimum $25,000 contribution from an individual, his or her family, or even a group of people, such as a club or high school class, that will be set up as a donor established fund with the St. Paul & Minnesota Foundation. A legacy foundation can receive many different types of contributions, including cash, stock gifts, retirement assets, property and more. All donations are tax-deductible.

The funds will join a family of funds associated with the Freeborn County Communities Foundation, which is an affiliate of the St. Paul & Minnesota Foundation.

“It is amazing what can happen to your money when you put it to work,” Arends said.

Leean Dulitz, chairwoman of the Freeborn County Communities Foundation, said the foundation is a perfect vehicle for the new legacy project.

Mai-Anh Tran, associate vice president of philanthropy for the St. Paul & Minnesota Foundation, said the state level foundation works with over 2,400 donors and nonprofits and is the state’s largest community foundation.

She spoke of her family and her father, who worked for the U.S. embassy, and how they had to leave what they knew as home after the Vietnam War and essentially start over with nothing. She said they were placed in a rural community where they rebuilt their lives.

She spoke of the importance of her family’s legacy and of leaving the community better than they found it.

She thanked the leaders of the local foundation for their partnership and vision and for ensuring that communities and neighbors are taken care of.

People interested in exploring a legacy foundation can call or email Leean Dulitz, board chairwoman of the Freeborn County Communities Foundation, at fccommunityfoundation@gmail.com or 507-383-5357. They can also reach out to Tod Herskovitz, community affiliates program manager with the St. Paul & Minnesota Foundation, at Tod.herskovitz@spmcf.org or 651-325-4208.