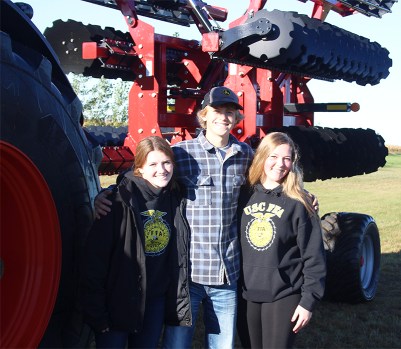 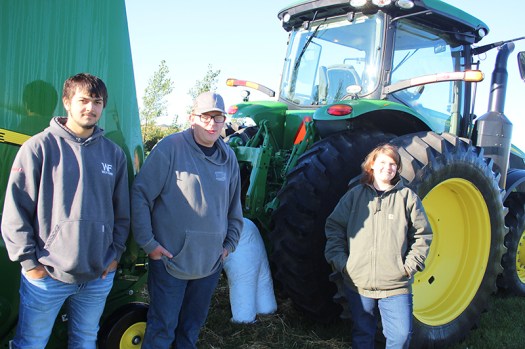 Some students present on a Power Take-off Extension, which powers equipment hooked to a tractor. Alex Guerrero/Albert Lea Tribune

WELLS — If you thought you saw both an ambulance and firetruck at United South Central School Wednesday morning, your eyes were not playing tricks on you. That’s because the school held two FFA farm safety programs that day.

“We’re bringing awareness to farm safety this week as we get into the fall harvest season, which really is just starting,” said Dan Dylla, agriculture instructor at the high school. “[We’re] trying to remind people how to be safe.”

The program was geared towards younger people from preschool to seventh and eighth grades.

“When we statistically look at it, agriculture’s like the second-most dangerous occupation out there as far as per capita injuries,” he said. “We want to make sure that we bring these hazards up to kids so they understand them.”

During the event, children visited various stations including one with a combine.

“Probably more than anything with the combine it’s a visibility thing, cause the combine’s are so big today that if you’re near it the driver can’t see you from the cab cause there’s too much stuff around, and so it’s easy to get run over,” he said. “I think we even had a farmer in this area about 10 years ago got run over by a combine and killed.”

Besides the combine, there were stations on lawnmowers, electrical safety, flowing grain and auger safety and power take-off safety.

“You get in one of those, it’s usually catastrophic,” he said. “If you’re lucky you’ll just lose an arm and a leg, but generally people [who] get caught in one die.”

Dylla also added that if a person got stuck in an emptying grain bin it was “almost impossible” to get them out.

“We’ll hear about flowing grain deaths one or two times a year, just in southern Minnesota,” he said. “Generally not with kids, but we hear about it with adults.”

The local fire and ambulance squads were there as well to talk about the work they did when an incident occurred.

For him, the hardest part of doing the demonstrations was determining what role the weather would play. In fact, he said there were times when it was snowing or windy. He also said having local equipment available could be challenging.

Mark Schmitz and Mandy Root were there with the Wells Community Ambulance.

“We were asked by the school to come down so that students know if there’s an accident, what an ambulance looks like, some equipment we would use,” Root said.

She also wanted students to learn that an ambulance isn’t scary.

Student Stacy Adams had a tractor with him, and he planned to talk to students about power take-off safety. This was his first time presenting.

“There’s usually up to 150 amputations and 40 deaths per year,” he said. “We just got to make sure these little kids are safe from the PTO and make sure that they know that it can really hurt them. And avoid less injuries and deaths from it.”

“It’s talking about how to be safe around tractors and how to act around them when they’re operating,” she said.

Above all Sonnek, the reporter for USC’s FFA chapter, wanted students to learn how to be safe, responsible and respectful around tractors.

Second grade teacher Amanda Henning actually participated in the program when she was a student and noted how beneficial it was for her.

“It teaches the kids the safety of farming and the equipment, how to be careful and cautious around all the equipment when you see it on the roads,” she said. “A lot of these kids, we’re in a rural area, and for them to know this information is really beneficial for them and their safety.”

Dylla has been holding these events for 30 years, though he said there were a couple years when he didn’t have them because of the pandemic. They also didn’t have it the first year USC moved to its new building because of a lack of grass. In total, he anticipated around 400 students going through the program Wednesday, with not all of them being USC students.

We have a local private school, St. Casimir’s, and we’ll bring them over this afternoon as they go through their demonstration,” he said. “We’ve had some daycares bring their kids out. They may or may not come today.”

“We’ve been doing this a long time,” he said.

He also said he did not experience anything like it when he was a student, though he wished he did.

In fact, earlier this week a farmer in the area who was on a tractor was hit and died.

“You get into the fall when it starts to get dark earlier, tractors aren’t as visible on the road, and he got hit,” he said. “All of his kids were ag students of mine back in the day, and I’ve got his grandkids coming through the program now.”