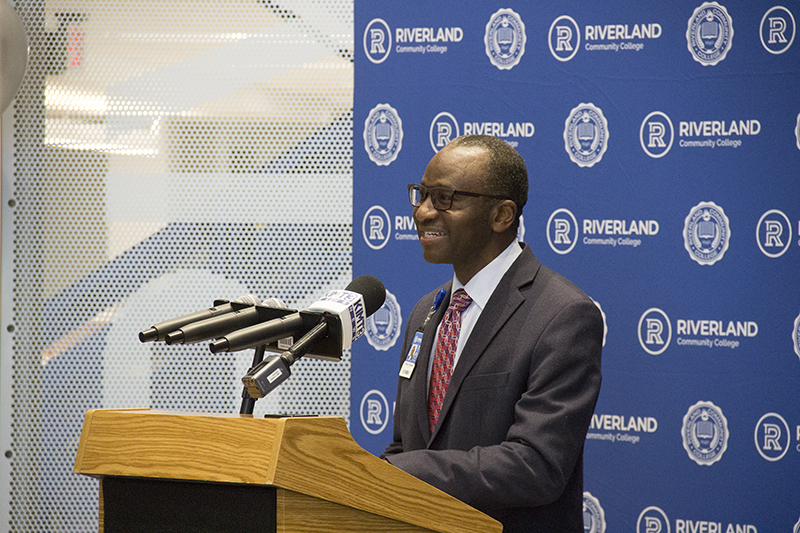 Riverland Community College President Adenuga Atewologun has announced to Minnesota State Chancellor Malhotra that he plans to retire at the end of this fiscal year, June 30, 2023, according to a press release.

Atewologun has served as Riverland’s president since July 1, 2013, 10 years by the time he completes his tenure. He will also have more than 40 years of service in higher education.

During President Atewologun’s time at Riverland, the college undertook intensive review of the academic programming, accreditation and experienced a growth in transfer pathway programs and enrollments. Under his leadership, the college worked to establish specialty areas at each campus building, including positioning the Albert Lea campus’ focus through a $10.1 million remodel and expansion of a Transportation, Trades and Industrial Education Center through a bonding project funded by the Minnesota Legislature. He currently has a new bonding project proposal in the works on the Austin campus to enhance and support services to meet the basic needs of Riverland students.

Under his stewardship, The Hormel Foundation created the Austin Assurance Scholarship that allows all Austin high school graduates an opportunity to attend Riverland without cost. Atewologun also worked with community farmers and producers, The Hormel Foundation and community leaders to create academic programming in Agriculture and Food Science Technology at Riverland. Atewologun will leave behind a legacy through a public-private partnership bringing together the University of Minnesota, elected officials and leaders from the private sector, to create an integrated complex — known as the Future of Advanced Agricultural Research in Minnesota (FAARM)— that will include world-class facilities, as well as several hundred acres of fields and land to further support the mission of FAARM and a strong forward-looking institutional momentum. A popular community figure, Atewologun has served on numerous boards and committees across southern Minnesota.

“Nuga (Atewologun) has been an effective and visionary leader,” said Minnesota State Chancellor Malhotra in a memo to the college community. “He is passionate about the success of the students and of the communities Riverland serves. He has demonstrated that strong leadership can co-exist with empathetic approaches to manage the college. He is a well-regarded leader within the region. His great work with The Hormel Foundation is a case in point. This work has enhanced access to the college for students in the area. He will leave the college with strong forward momentum to build on to secure its future.”

“One of my greatest joys at Riverland has been making community connections across the region the college serves,” Atewologun said. “I look forward to the upcoming academic year to continue the work and thank the communities for the generous support they have shown me personally and the community college we all love.”

By announcing his retirement early in the academic year, it allows Minnesota State time to conduct a presidential search before the end of his tenure. The goal will be to hire and name the next Riverland president so that person is prepared to start on July 1, 2023. The search process will begin almost immediately and encourages the community to become involved in finding and naming Riverland’s next president. In the coming weeks, Malhotra intends to visit with students, faculty, staff and community members to listen and learn about the current context and future aspirations for the college. These conversations are also critical to give the chancellor insight on the leadership qualities that the community would like to see in the next Riverland president.