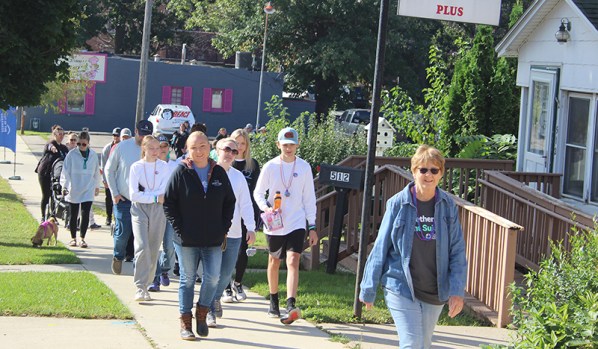 Participants of Saturday's Out of Darkness walk make their way up Broadway. The event raised more than what organizer Darcy Nielsen hoped. Alex Guerrero/Albert Lea Tribune 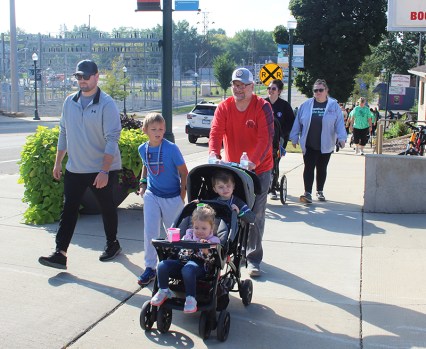 The Out of the Darkness Walk raises money for suicide awareness. Alex Guerrero/Albert Lea Tribune

Darcy Nielsen could not have asked for better weather Saturday morning for the Out of the Darkness Walk, which started at Trinity Lutheran Church. The event was to raise awareness for suicide prevention and awareness.

The event is typically held the third Saturday in September during Mental Health Awareness Month.

“We’re just spreading the awareness that people are never alone, that there is people out there who are able to help,” said Nielsen, the event’s organizer.

This was the fourth Out of the Darkness Walk in Albert Lea, but because of a prior commitment it was held during the last Saturday of the month.

This was her fifth year participating after doing one in Austin.

“[The event chair in Austin] asked me if I would like to bring it to Albert Lea,” she said.

She said community response was “awesome” and said people were both supportive and giving with their donations and sponsors.

Nielsen herself lost a cousin to suicide in 2016.

Jason Hoiseth, a mental health case aide at the Freeborn County Department of Human Services, spoke before the event.

During his speech, he emphasized all the love within the community, as well as the resources to help people and where to find them.

“We have two psychiatrists, we have four therapists, we have case managers and case aides, and then there’s lots of referral sources that we refer out to,” he said.

Hoiseth also said there was hope as well as options.

Nielsen admitted she was surprised at how much she raised.

Less than an hour before it started, 116 people had registered, but people had the option to walk up and register the day of. Last year’s event drew 244 people.

The two-mile walk started at Trinity Lutheran and headed north on Broadway to the gazebo on Fountain Lake before going around Fountain Lake to New Denmark Park and returning to the church.