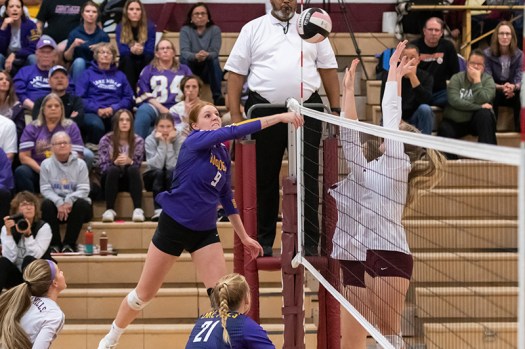 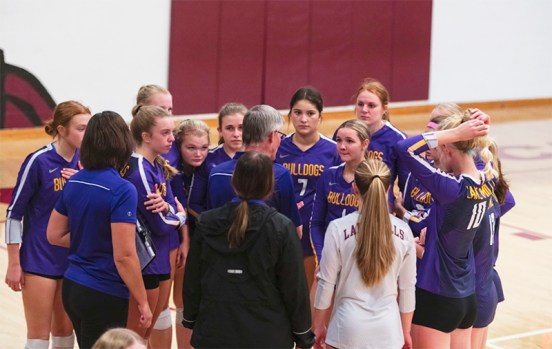 Lake Mills coach Jim Boehmer speaks to his team during the Monday match against Grundy Center. Lory Groe/for the Tribune

Head coach Jim Boehmer said he was pleased with how his team battled back and forth in the first two sets. He said his team was resilient in their efforts, it just came down to the Spartans failing to make a mistake or give up their lead.

“Grundy Center is a very good team and has one of the best hitters in the state on the left side,” Boehmer said. “They fed her the ball and we dug some tough swings all night. I was pleased with how the back row stepped up all night long.”

Leading the way in digs for the back row was Natalie Brandenburg with 11. Finley Rogstad had seven, Taylor Vanek had six and Brynn Rognes had four.

“On defense Natalie, Taylor, Finley and Brynn all made some amazing digs and battled to be in a position to make plays,” Boehmer said. “They did that. I thought Brynn also had one of her best nights.”

Offensively, the team was led by Ellie Hanna and Ava Moen who each had six kills. Rogstad finished with five.

“I thought our front row played well and our defense played well,” he said. “Ava Moen had her best night of the season and that was great to see her step up in this match. Finley adding five kills on the right side was also a nice addition to our game.”

The Bulldogs end their season with a 30-7 record, finishing with 30 plus wins for the 18th time in the last 19 seasons. The only season short of 30 wins was the 2020 season, shortened by COVID-19. They also won the Top of Iowa Conference title for the 18th time in 20 seasons and improved to 142-2 in conference play since 2003.

“I am very proud of them for all they accomplished,” Boehmer said. “The six seniors will be dearly missed. We have a great group of returning 9-11 grade players so expect more of the same next year. We will return a number of letter winners and kids that saw a lot of action on the floor this year. We had some talent that needs to be replaced on the floor, but again, we have the talent to do that.”