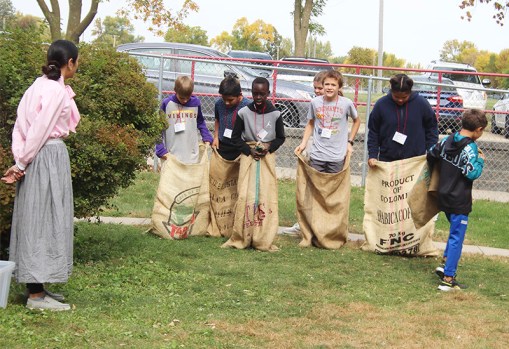 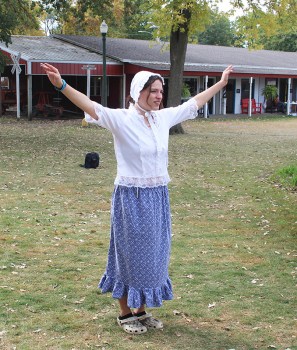 Isabelle Brown, standing at the other end of the space where students prepare to run, prepares to count them down during the sack race Tuesday. Alex Guerrero/Albert Lea Tribune 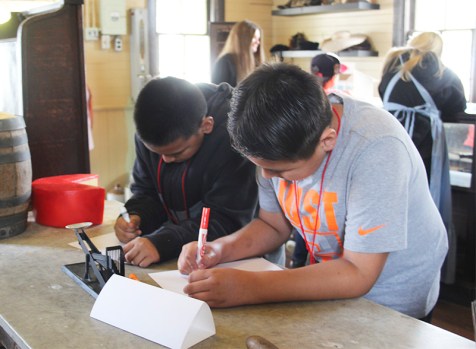 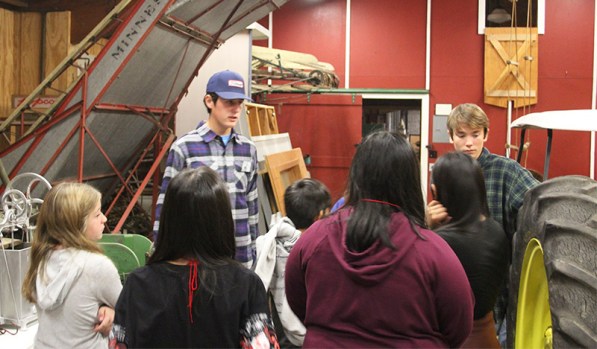 Drew Teeter, left, and Jon Amarosa speak with students during their presentation as part of Discover History Days on Tuesday at the Freeborn County Historical Museum and Village. Alex Guerrero/Albert Lea Tribune

“We are doing what’s called History Day at the Freeborn County Historical Museum, Village and Library,” Haney said. “That is, my students, the 11th and 12th graders, are teaching fifth graders about Freeborn County history from approximately 1858 to 1911. Sometimes we move a little bit further ahead, like for example (in) music and entertainment we talk about Marion Ross and Eddie Cochran that don’t quite fit the time-frame.”

During the four-day period, which started last Thursday, ran Monday and Tuesday and is scheduled to wrap up on Thursday, Haney’s goal is for students to do as many hands-on activities

as possible and learn what it may have been like to wash clothes, shell corn and even observe a church service.

This was the 25th year Haney has done the activity.

“The idea was given to me by the education committee of the museum, … and we started with just one school coming 25 years ago, and now we have all the public and private schools in Albert Lea, and we have Alden-Conger. I think Glenville-Emmons is coming.”

The program was held in the spring last year.

“The problem with doing it in the spring is that many of the elementary students, as well as my students, are in the middle of testing,” he said.

And that made it harder to schedule the program for the spring. In fact, he said the reason it was held last spring was because of COVID-19 concerns as well as construction on Bridge Avenue, which made it more difficult for his students to get to the museum.

The only difference was that students were given different topics to present on, including crafts, church, agriculture, music and entertainment, the general store, the schoolhouse, immigration, transportation, occupations and meeting places, among others.

Subjects were assigned after Haney gave students a tour and, in groups, asked them to rank the topics by preference.

“It’s a multi-generational project, and also it makes them think on their feet, and learn how to do research, and prepare a lesson plan,” he said.

“[Students] gain an appreciation for history, and I hope they gain confidence in making presentations that they’ll do in the future, whether in business or teaching or medical or whatever field they’ll go into,” he said.

He said he also thought his students could serve as role models for the younger ones.

Jaylee Waters, a junior in Haney’s third-period class at the high school, taught students about Victorian housing and log cabins.

“It’s been really exciting getting to see the differences in housing compared to the housing that I live in now, just let alone seeing the different economic classes and how there was different classes compared to poor housing and rich housing,” she said.

Waters said she did the tour when she was younger, and described the experience as “cool” and was excited to do the teaching.

“I felt like I was back in the olden days learning about the stuff, and I never thought that this was going to be me one day getting to teach it,” she said.

Avery Benda was another student in the AP Government class. This was her second time performing at the museum and called last year’s experience “probably the highlight of my year.”

“I was really excited,” she said. “I teach dance at [Unlimited Possibilities Dance Studio] and I’ve been doing that for a really long time, so I work with kids a lot. I also teach Sunday School.

“So I have a lot of experience with kids, and I was really excited to just see another aspect of that because I work mostly with girls when it comes to dance.”

Her favorite part of the experience was interacting with the younger students.

Fifth grader Cayden Esch, who said he was excited about the trip, came with other students from Halverson.

His favorite part of the field trip was recess, where he got to play duck-duck-goose. He also thanked the high school students for putting the program together.

Her favorite part was visiting the schoolhouse.

Haney estimated 100 of his own students will teach between the four days, while there were anywhere from 300 to 400 elementary students. Besides Halverson’s fifth graders, students from Hawthorne, Lakeview and Sibley attended on different days, as well as those from St. Theodore, Alden-Conger, Hollandale-Christian and Glenville-Emmons were scheduled to tour.