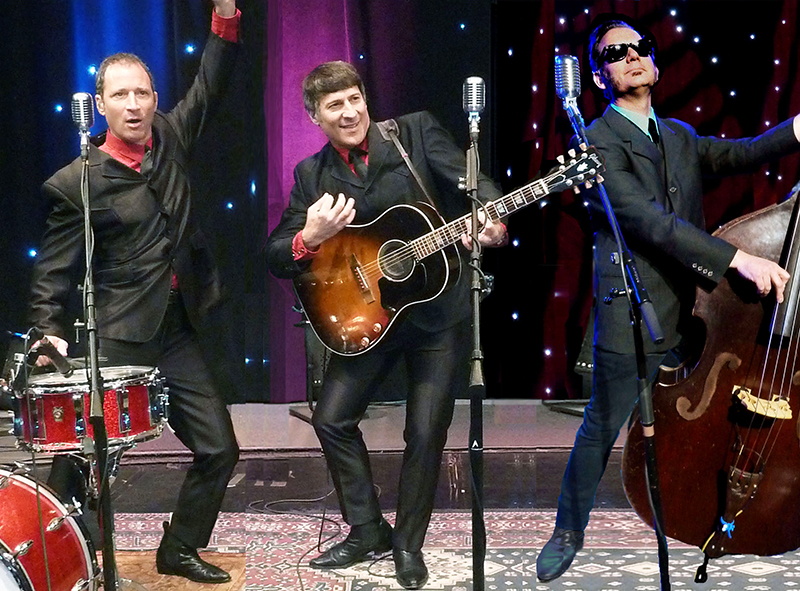 The Neverly Brothers will perform "A Rock 'n’ Roll Tribute from Elvis to The Beatles Featuring The Neverly Brothers,” Nov. 3 at the Marion Ross Performing Arts Center. From left, Kegham and Kevin Giragosian and Mike Bradburn. Provided

A history of music returns to the Marion Ross Performing Arts Center Nov. 3 with the show, “A Rock ’n’ Roll Tribute from Elvis to The Beatles Featuring The Neverly Brothers.” This will be the second time performing what Kevin Giragosian referred to as a bus tour following last year’s December show.

The band is made up of brothers Kevin (lead singer, guitar and harmonica) and Kegham Giragosian (lead singer, drums) and Mike Bradburn (bass, background vocals).

“It’s the same act, same concept as it has been for a long time,” said Kevin Giragosian, referring to what he described as a rock ’n’roll historical tour featuring songs and narration of the genre’s birth and death in America in the 1950s and its resuscitation by English bands in the ’60s. Between songs, he will tell the audience where they’re headed to next, which artist was based in that city, provide insight/background into that performer and explain the importance of said artist before repeating the act with another musician. According to Giragosian, British bands took American music and re-recorded it in a way that was more appealing to a white audience and not a Black one.

“It was a universal kind of spin they put on them, and that was kind of the whole reason rock was kept alive,” he said. “These British bands took this music that was sort of dying out or was more obscure, not as mainstream in America.”

In fact, he believed British bands re-recorded American music while putting their own twists to them, and thus made them more available to a wider audience.

Giragosian believed the show enlightened and educated viewers on how the genre started, died and then experienced a second wind.

The first half of the show will focus on American pioneer rock ’n’ roll, while the second half focused on the 1964 British invasion bands, which, for the most part, featured American songs.

“The ’50s  was when rock was created in America, so that’s a crucial time — it was a breakthrough so-to-speak,” he said. “Every musical genre has its beginnings, its birth.”

That’s when artists such as Jerry Lee Lewis, Chuck Berry, Buddy Holly and the Everly Brothers peaked and then disappeared, a lot of them dead or retired. Or in the case of Lewis, ostracized for marrying his 13-year-old cousin.

And he believed the British invasion of the ’60s saved the music from extinction, at least according to Giradosian.

“They rejuvenated it, or revived rock ’n roll, they resuscitated it from its death,” they said. “They started playing these songs, and they were basically these white guys playing this Black music and they were doing it their own way, they were interpreting it.”

They then could take the audience to Lubbock, Texas, home of Buddy Holly, Kentucky and the Everly Brothers and St. Louis, Missouri (home of Chuck Berry). On the British half of the tour, he said they always started in Liverpool, home of The Beatles. He then could take viewers to London where there were a lot of artists (including The Rolling Stones). Manchester was a popular stop, as well as Newcastle.

Giradosian said the show would not be a three-piece band covering oldies songs. Rather, he described the concert as an act or concept telling a story.

Besides performing, the Neverly Brothers sell CDs at their shows with the same historical trivia they try to impart on their audiences.

“It’s a fun little package,” he said. “Reflects the stage show as well.”

Giragosian admitted his prior work owning and operating Red Tower Records in Chicago helped him.

“It was a time in my life when I was still playing guitar, but I wasn’t in a band when [he and brother Kegham] first opened the record store,” he said. “And then we were exposed to all this music, and it kind of got me back into maybe wanting to play.”

“The Everly Brothers kind of got me interested in ’50s music, and I was more into the British invasion of The Beatles and other bands of that era,” he said.

Ironically, The Neverly Brothers were never intended to be a full-time band, just a labor of love. And almost 20 years later, they’re a popular theater act.

Bradburn joined the brothers around 2017 following the retirement of their original bass player.

Last December’s show was the first time the three-piece band performed at the Marion Ross Performing Arts Center. Besides theaters, the band will do private events and outdoor shows.

“We’re looking forward to having another successful show,” he said.