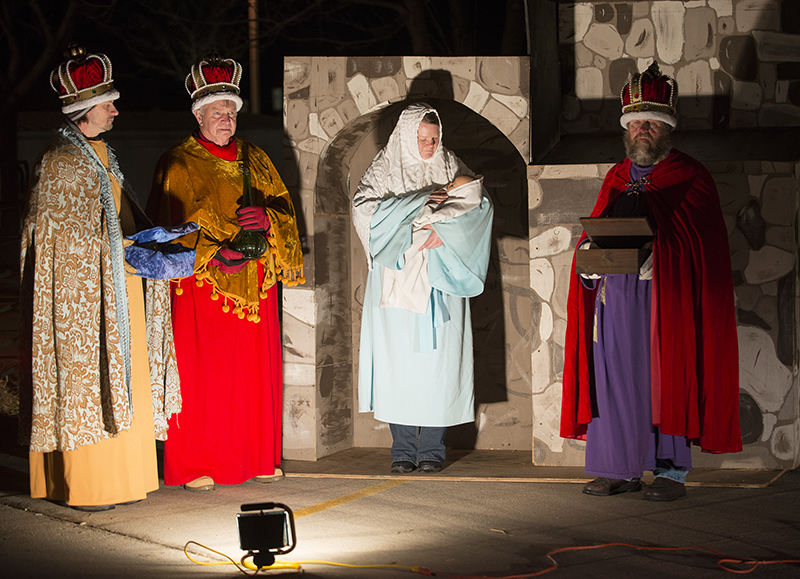 The annual drive-thru live Nativity at New Life Christian Church will be on Friday and Saturday at the church. - Colleen Harrison/Albert Lea Tribune

The first Friday and Saturday of December are coming up, which means New Life Christian Church will host its 27th annual drive-thru live Nativity.

From 7 to 9 p.m. both days, volunteers will depict scenes stretching from Roman proclamations to the inn and stable to the burial and resurrection of Jesus Christ.

“Live Nativity is a drive-thru revisiting of … God’s plan of salvation and especially a look at Bethlehem during the time of the birth of Christ,” said Vern Harris, pastor at New Life Christian Church.

People will reenact different scenes, something Harris said was key as visitors came by. There will also be live animals including at least one camel and donkey, and Harris noted children always enjoyed seeing live animals.

In total, Harris said at least 100 people will participate, with characters standing outside for 20 minutes before another group wearing the exact same apparel will take their places. He estimated the event typically draws about 1,500 people.

Preparations for the drive-thru, an event he described as the church’s Christmas gift to Albert Lea — started in August. The drive-thru started as a way for the church to shine a light on Christmas.

“It just felt there wasn’t anything in Albert Lea of that nature, and so our people decided, “Well, we will just invest in it.’”

Harris said only extreme weather, like last year’s blizzard that produced 9 inches of snow with a 40 mph wind, would cancel the event.

“At that point, we do not want to [encourage] people out of their homes or down the road,” he said. “It just seems like good judgment to say no. The officials say no unnecessary travel.”

The church is at 1705 SE Marshall St., and upon entrance to the parking lot visitors will be given a paper explaining the different scenes. People can go at their own pace, and the event is free. Harris said no donations will be accepted at the event and people should instead give to a local charity.

He described the overall event as “a traditional treasure” for families in the area, and this will be his 11th year he has been involved.