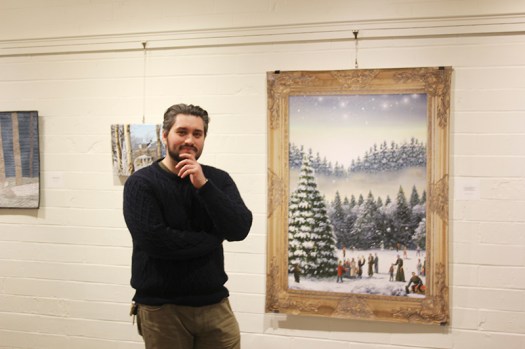 Elisha Marin, executive director of Freeborn County Arts Initiative, stands next to a piece for the "Winter Wonderland" exhibit. The work incorporates artificial intelligence. See if you can find it. Alex Guerrero/Albert Lea Tribune 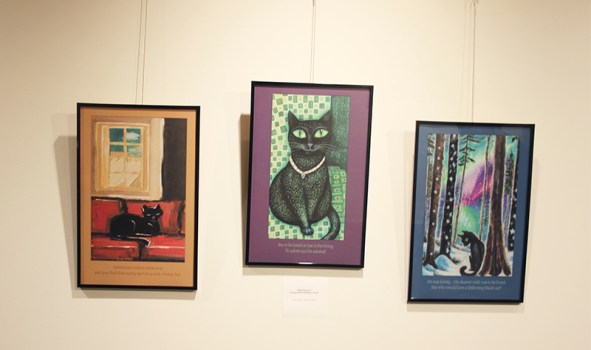 Marin describes the end-of-year exhibits as a beautiful way to end the year and celebrate with patrons and artists. Alex Guerrero/Albert Lea Tribune 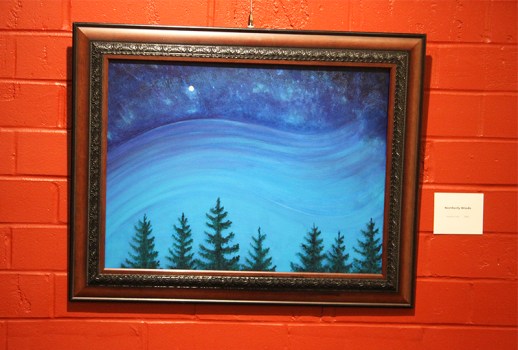 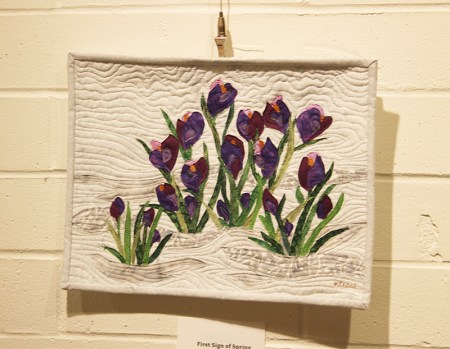 Besides "Winter Wonderland" the Arts Initiative is having a pop-up shop with items including jewelry. Alex Guerrero/Albert Lea Tribune 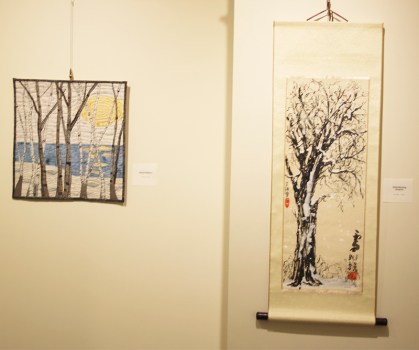 According to Marin, the show has 14 members showing 30 pieces, including sumi-e, acrylic and oil. Alex Guerrero/Albert Lea Tribune

There’s snow on the ground and the season is getting colder, so it’s appropriate that the Freeborn County Arts Initiative annual member show, titled “Winter Wonderland,” is up.

“This is an exhibition comprised of artwork by members from across the state of Minnesota primarily, some from Iowa as well,” said Elisha Marin, executive director of the Arts Initiative. “Every year we give out a theme — usually it’s holiday-themed or wintery-themed.”

Marin said there were 14 artists in the mixed-media show, which included a sumi-e piece from Dee Teller, acrylic work from Susanne Crane and oil painting from Inkpa Mani, among others.

“This is a chance for our membership to celebrate the close of another great year of programming,” Marin said. “The holidays are quite often a time of reflection and coming together, and the world’s been a very different place in the last couple years.”

There are also photography and mosaics, but according to Marin it’s the artificial intelligence pieces that are most popular.

“They’re using advanced, state-of-the-art AI image-generation technology with traditional painting, found objects and a lot of digital manipulation like Photoshop and Illustrator on top of that,” he said. “Those are displayed as prints here.”

Previous member shows included “Evergreen,” “Home for the Holidays” and even held a Clue-themed exhibit.

“All the artwork was displayed without names or titles and every piece was numbered,” he said. “People had to go through and kind of like a game of Clue, we had these little notebooks, exactly like Clue, and people could guess and win prizes.”

He described the end-of-year exhibits as a beautiful way to end the season and celebrate with patrons and artists.

Marin thanked members and said the organization was grateful for the artists, patrons and supporters, both in Minnesota, regionally and across the country.

And at 7 p.m. Dec. 18 the Arts Initiative will publish “Sounds of the Solstice,” their holiday open-mic and features musicians from across the country.

“We cut it together into a big video music production,” he said.

Besides “Winter Wonderland” and “Sounds of the Solstice,” there is also a pop-up shop running until Christmas Eve in the front of the building. Marin described it as a companion to the show.

“That has jewelry, more art prints, different things,” he said.

Everything available at the pop-up shop is also made by members.

“We’re very proud to host a lot of grant projects here, and a big part of what we’ve done is a lot of book publishing,” he said.

For more information on either the exhibit or pop-up shop, contact Marin at 507-318-2798. For anyone interested in joining, membership is free for students and $35 per year for individuals. Visit fcai.us.