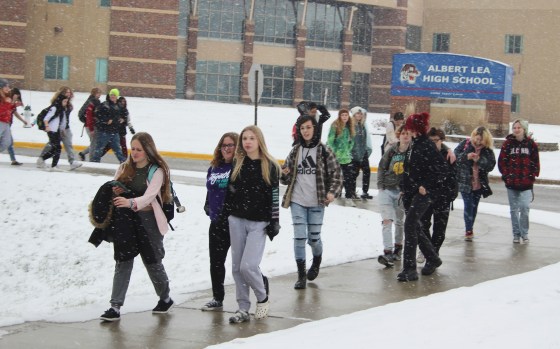 Albert Lea students originally planned to walk out of school Monday, but pushed the event back to Tuesday after doors were locked Monday. Alex Guerrero/Albert Lea Tribune 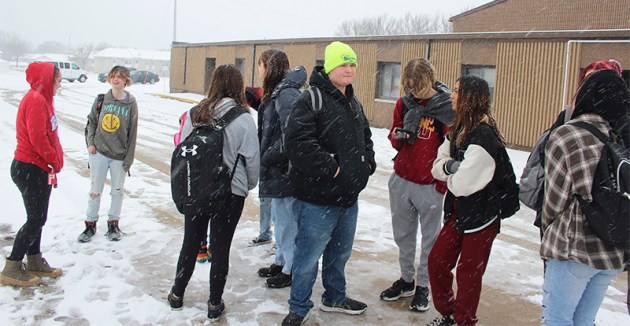 Students stop at Bridge Community Church as part of their walkout protest, and the weather doesn't bother them. Alex Guerrero/Albert Lea Tribune 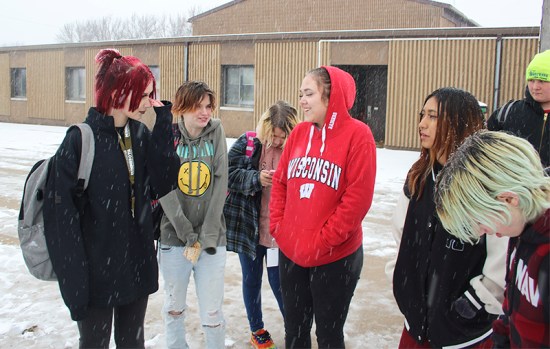 Despite below freezing temperatures and snow falling fast, students walked out of Albert Lea High School Tuesday afternoon to protest allegations a student had assaulted three female students on campus and to bring attention to bullying within the district.

Students Elias Hites and Aurora Cox led the protest, which according to Hites was in the works for the last four weeks.

“Basically a lot of students had been going to the principal of the school with issues as far as bullying and harassment that has gotten as bad as people getting books thrown at them, pushing down stairs, stuff like that,” Hites said.

She said all three girls who were allegedly assaulted went to Principal Chris Dibble and that nothing was done to address the allegations. She also said Dibble and school staff weren’t doing anything to address student safety.

“They were told that there was no evidential proof despite there being multiple witnesses,” Hites said. “I happen to know one of the girls personally.”

“[Dibble] continued to say that he had never heard of the sexual assault allegations and that he was completely oblivious to it when there are several people saying that they had went to him and told him about that.”

Hites and Cox said they were not pleased with the response they received.

Hites said she was nervous before the walkout but decided to continue with the walkout because she felt she was doing something to encourage change.

“We had reached out to the school board about this, so they knew prior to when we were doing this,” Hites said.

“My goal with this was that if I could make anybody’s life at ALHS better than my life here, then I succeeded,” Cox said.

Hites herself said she was bullied last year to a point where she had bruises, and said the staff didn’t do anything to help.

“I know people here — or at least people in the walkout — were also a victim of bullying and the principal and staff team did nothing to help them to get rid of this issue or resolve it in any sort of way,” she said.

Cox said she also had been to the office multiple times and that the school did nothing other than transfer her out of classes she shared with the people who bullied her.

Above all, Hites wanted accountability as well as for students to be able to feel safe. To that effect, she wanted them to look at camera recordings and develop a better support system.

The duo estimated 30 students physically walked out, and said there were more who wanted to participate but were stopped. Hites and Cox said they were surprised students were stopped from joining.

“When I and [Cox] have been brought down to the office to talk about this, and when we brought up the fact that we have a right to a peaceful protest, they said that it basically that does not apply at the school, stuff like that,” Hites said.

But Hites said such action left her feeling like the school and district admitted to trying to cover something up to the general public.

“As of [Monday] we had heard that they were making phone calls to parents saying that if you were to participate in the walkout that you could be suspended and/or expelled,” Cox said.

And that was a problem.

“I feel like a lot of students in this school don’t feel safe or supported going to this school,” Hites said.”They don’t feel like they have enough support in the school.”

According to Hites, much of the bullying itself was inside the classrooms, and that teachers brought up the issues with administrators.

“Try to make students feel more supported in the school and try to make it so that people aren’t scared to go to the high school because they are in fear of getting bullied,” Hites said.

Courtney Oakland and Carley Ladlie attended after learning about the walkout on social media.

Oakland said she didn’t think people were being held accountable.

“We need to do something bigger to really bring attention to it,” she said.

“I think it’s really important to show solidarity, especially with things like bullying, because I know that it can take a toll on people’s mental health.”

Oakland said she had friends who experienced bullying and that it broke them down internally.

“We’re not living in the olden ages, it’s 2022, it’s time to stand up to these people who are doing this and start talking to them, start suspending them, start even mentioning expulsion when they keep doing this over and over again,” she said.

“This is not something that should be continuing to happen and happen nowadays,” Ladlie said. “I have no words for it.”

Albert Lea Area Schools said in a statement provided to ABC 6 News: “As a district, we take all of these reports seriously. When we get a report of this nature we work collaboratively with the police department to do a thorough investigation. We will continue to monitor any reports that are submitted and take all complaints of these allegations seriously.’”