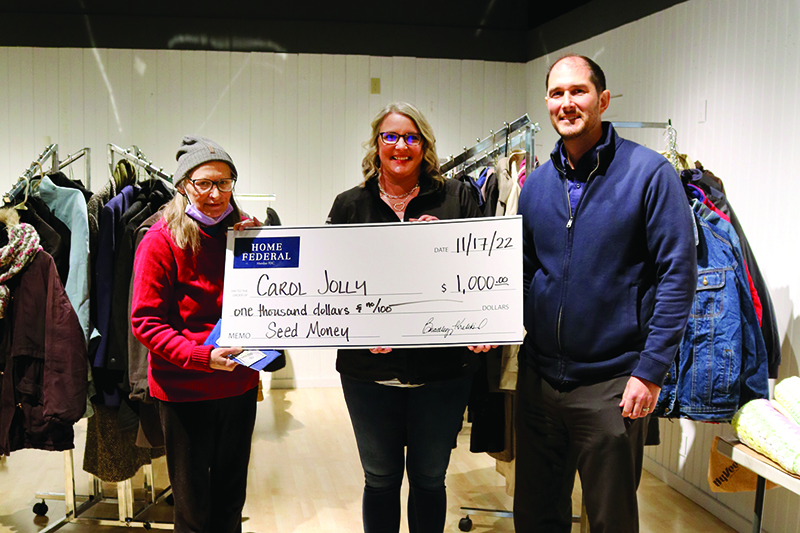 Home Federal’s Miranda Sailor (lead teller) and Kevin LaFrance (market president) present Carol Jolly with $1,000 in cash as part of an ongoing campaign that recognizes people who go above and beyond to serve their communities. Provided

Home Federal bank in Albert Lea announced Tuesday they have rewarded Carol Jolly with $1,000 in cash as part of the bank’s on-going Seed Money campaign that recognizes and rewards individuals who go above and beyond in the communities they serve.

Jolly has spent the last seven years providing outwear essentials to those who need them through Jack Frost’s Closet.

“I saw such a need — many people were asking for coats that didn’t have them for their children or couldn’t financially afford it,” Jolly said.

Located in the Skyline Plaza mall, Jack Frost’s Closet can help people of all  ages secure a warm winter coat, as well as boots, gloves, clothing, socks and even blankets. The main goal for individuals that come to Jack Frost’s Closet is that they walk away with at least a coat, matching scarf and pair of mittens so they can stay warm during the harsh cold weather of southeastern Minnesota.

Since Jolly has been on both ends of giving and receiving help when she needed it most, she knows how much of  an impact it makes to give back to her community.

With the help of her nominator Shari Sprague and local volunteer Jean Eaton, Market President Kevin LaFrance  and lead teller Miranda Sailor were able to surprise Jolly at Jack Frost’s Closet. Once LaFrance explained what the Seed Money initiative was, Sailor handed over the $1,000 in cash to Jolly, who immediately teared up  in appreciation.

“Giving back to the community is very important to us at Home Federal. This is why giving this money and  recognition to Carol is important to us and really showcases what Seed Money is all about,” LaFrance said after surprising Jolly with the cash.

“I nominated Carol because I’ve never seen a person endure so much, so often, and keeps a smile on her face,  and still gives back to the community — even with all that she’s dealing with in her personal life,” said Sprague, who is also the executive director of the Albert Lea-Freeborn County Chamber of Commerce. “It’s  really incredible, and there aren’t many people out there like that.”

Home Federal documented Jolly’s surprise on video. You can watch her video (along with other Seed Money recipient videos) to learn more about her impact on the community and how you can help support Jack Frost’s Closet by visiting JustCallHome.com/SeedMoney — where you can see Home Federal’s Seed Money campaign in action.