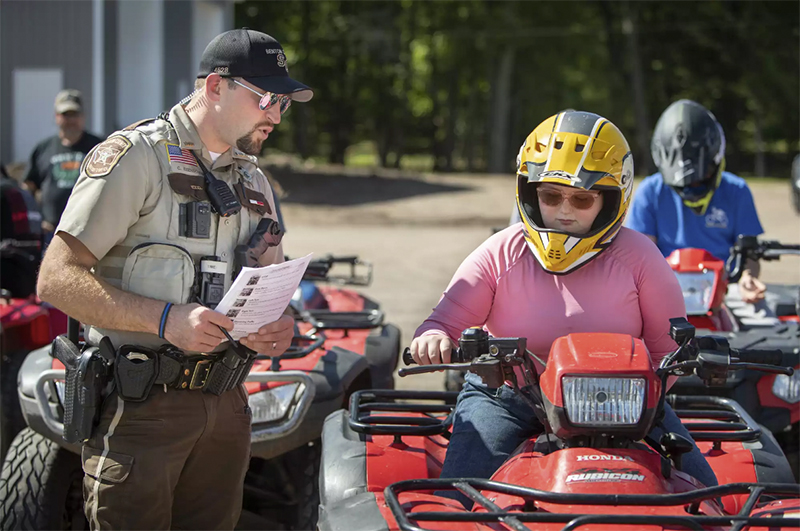 Benton County Deputy Sheriff Cody Eisenschenk (left) leads Elizabeth Finke, 12, of Princeton, Minn., through a check of her controls during a hands-on ATV safety class for ages 10-15 on Sept. 11 in Foley. Kimm Anderson for MPR News

Four-year-old Steve “Owen” Meyer died in July after losing control of the all-terrain vehicle he was driving on a gravel road near a Morrison County farm, without his parents’ permission.

A 6-year-old passenger jumped off before the ATV rolled but Owen didn’t make it, dying two days before his fifth birthday. His obituary described him as a “resilient, fearless, little boy that believed that nothing could hurt him.”

He was the youngest victim of an ATV crash this year in Minnesota, but he wasn’t the only child to die that way.

All-terrain vehicle use has surged as an outdoor recreational activity across Minnesota, especially since the COVID-19 pandemic. But their popularity has come with a human toll: 67 Minnesotans have died in ATV crashes in the past three years, including 21 this year. Of the 67 victims, 12 were children younger than 18.

“It’s been an issue that’s been concerning us for about the last year,” said Jason McDonald, an injury prevention specialist with the health care provider CentraCare, which serves a broad swath of small towns and rural areas in central Minnesota.

Minnesota law restricts how large a vehicle children younger than 16 can operate, and where. The state also prohibits anyone under 15 from driving a Class 2 ATV, which are larger. Law enforcement officers, however, say they frequently see and stop youth riding vehicles that are too big for them.

Crashes involving children are especially devastating for families, and even for experienced first responders called to the scene.

“Once you have children, it makes things a lot harder.” said McDonald,  who also works as a part-time law enforcement officer and a paramedic in central Minnesota. “What’s really hard is when you know that it’s something that you could have prevented.”

Interest in riding ATVs has boomed since the start of the pandemic, as many Minnesotans sought opportunities to spend time outdoors.

In Minnesota, the number of registered ATVs not used for agriculture has increased by 30 percent over the past decade. It jumped 10 percent from 2019 to 2021, according to data from the Minnesota Department of Natural Resources.

“We’ve seen a tremendous increase in sales and the activity on the trails,” said Ron Potter, president of the ATV Association of Minnesota, which represents ATV owners and operators. “People couldn’t go out of the country, or even out of the state. They recreated locally.”

Today’s ATVs, however, are much different than the three-wheelers commonly used for yard and farm chores in days past. They’re larger, faster and more powerful.

“These vehicles are being made more for recreational purposes than for farming and work purposes, which they originally were designed for,” said Amber Ladd, a Minnesota Department of Natural Resources regional training officer who teaches ATV safety and certifies instructors. “A lot more folks are using them to recreate than they used to.”

Rollovers are a serious danger when children are driving vehicles that are too large for them. ATVs have a high center of gravity, making them prone to tipping if they get off balance.

“If you’re not familiar with operating them, you’re not going to understand how to adjust your body weight.” Ladd said.

The newer ATVs have power steering, which also can be problematic. At high speeds, the slightest movement of the handle bar can cause a loss of control, she said.

“If it’s not appropriate for your size, you can’t reach the pedals,” said Jason Worlie, a Morrison County deputy. “It’s harder to control the machine. And obviously, they have a lot more power than someone that’s not age-appropriate to drive it can handle.”

Worlie estimates that 80 to 90 percent of serious ATV crashes in Morrison County involved a rollover. Some were side-by-sides driven on roads at high speeds with the occupants not wearing safety belts, he said.

“When you lose control and roll, you tend to get ejected,” Worlie said. “That’s when we’re seeing some, if not fatal, serious injury accidents.”

According to a recent report from the American Academy of Pediatrics, data from the U.S. Consumer Product Safety Commission show that from 1982 to 2015, ATV crashes killed more than 3,000 children younger than age 16. Nearly a million more suffered injuries that required trips to the emergency room.

Dr. Charles Jennissen, a pediatric emergency medicine physician at the University of Iowa, has spent much of his career focused on preventing ATV injuries and deaths.

While growing up on a farm near Sauk Centre, Minn., his cousin and a neighbor boy, both 13, died after they were struck by a pickup truck while riding an ATV.

The typical ATV has grown a lot bigger and heavier over the past 25 years, Jennissen said. All adult-size vehicles can go at least 45 miles per hour, and most can travel at highway speeds, Jennissen said.

“The forces that are transmitted when someone gets in a crash or loses control of the vehicle is much greater,” he said. “And that weight hitting them can do a lot more damage.”

With the increased size, there’s a greater risk of the vehicle rolling over on top of the rider, Jennissen said.

“They can’t get the vehicle off of them, and so they can die of traumatic asphyxiation,” he said.

Jennissen was the primary author of recommendations from the American Academy of Pediatrics released in October that children under 16 should not be allowed to ride ATVs.

A key reason, he said, is that riding an ATV requires a different level of cognitive thinking than driving a car on a flat road with signs pointing the way.

“But on an off-road vehicle, like an ATV or side-by-side, you can go anywhere,” Jennissen said. “There’s continually changing terrain, things going on that you need to continuously pay attention to. And children are not always so good about being able to do that.”

Minnesota regulations allow children younger than age 10 to operate an ATV on private property. Older youth can ride on public land and trails if they have safety training and adult supervision.

Every ATV rider under age 18 is required to wear a helmet, but law enforcement officers say the rule is frequently violated.

Seeing young riders without helmets is “pretty tough for us to swallow,” said Ladd, the DNR trainer.

So is seeing them giving a ride to a passenger, or driving on a road without supervision.

Authorities “do see a lot of these ATVs being used as babysitters,” she added. “Most of these kids don’t know the rules of the road. They don’t drive a car. So they might not be able to predict traffic that well.”

Conservation officers typically bring youth operators who are violating the law home to their parents who sometimes face a warning or citation depending on attitude, previous offenses and riding behavior.

ATVs are manufactured to operate off-road. Their big, low-inflated tires with knobby tread are not designed for pavement, Ladd said. “The vehicle itself is going to respond differently than they probably would expect it to.”

Most aren’t equipped with good mirrors that allow the rider to see what’s around them, Ladd said. “These guys are just going flying down the road at 50, 55 miles an hour, when you’ve got all these other vehicles going on the road too.”

Side-by-side ATVs, sometimes known as utility vehicles or UTVs, are surging in popularity. They can carry two people who sit beside each other, and typically have a steering wheel and safety features such as a cage and seat belts.

But studies have shown that many people injured or killed in crashes were not wearing helmets or seat belts, Jennissen said.

That can lead to people being thrown from the vehicle in a rollover, he said. The tragic result can be the loss of extremities such as arms and legs, or even death.

Jennissen argues that there needs to be a change in the culture around kids and ATVs, including stronger safety standards.

“We need to make certain that we’re encouraging parents and other adults to do the right thing related to their children when on these vehicles,” he said. “It’s so much easier to make that decision to begin with, than to have to live with the death of your child.”

MPR News reached out to ATV manufacturers. Most did not respond to a request for an interview.

In a statement, Polaris spokesperson Jess Rogers said the company promotes responsible riding and proper operation of its vehicles, including stressing the need for adult supervision of youth riders.

She said it prohibits dealers from selling adult-sized models for youth, and offers smaller models designed for young riders with built-in safety features, including one that allows parents to limit their speed.

The vast majority of victims of fatal ATV crashes in Minnesota in the past three years did not take safety training, according to DNR data.

The ATV safety training course is offered periodically around Minnesota, and typically fills quickly with young riders who want to earn their safety certificate.

It’s required for anyone 12 years or older and born after July 1, 1987 to ride an ATV on public land, state trails and road rights-of-way.

On a recent fall Sunday, Chris Triplett drove an hour with his son from their home in Rockford to a dusty field in Foley, in Benton County.

There, 11-year-old Cullen learned the basics of safely riding an all-terrain vehicle — first in a garage that served as a makeshift classroom, then maneuvering an ATV through a maze of yellow cones and over obstacles during a hands-on course.

For Triplett, the youth safety course is a necessary element to participate in an outdoor activity the family enjoys doing together.

Triplett is aware of the risks of ATVs, especially for children. Cullen’s older brother took the youth safety course three years ago.

The family rides on their private property in Rockford, or on public property in the Grand Rapids area, and safety weighs constantly on Triplett’s mind.

“I think about it all the time,” he said. “If I could, I’d make him wear bubble wrap, and I’d have him have arm floaties on. Mouth guards, if I could.”

Instead, Triplett said he lets Cullen ride an ATV as long as his son is helmeted and under close supervision.

Ladd said she frequently encounters youth riding ATVs with their parents’ permission who have not taken the safety class.

“The reason I’m having contact with them is they’re doing something unsafe — either they’re violating a law, they don’t have a helmet on, they’re not operating very well,” she said. “Had they taken that class, they would have already realized that these were the laws.”