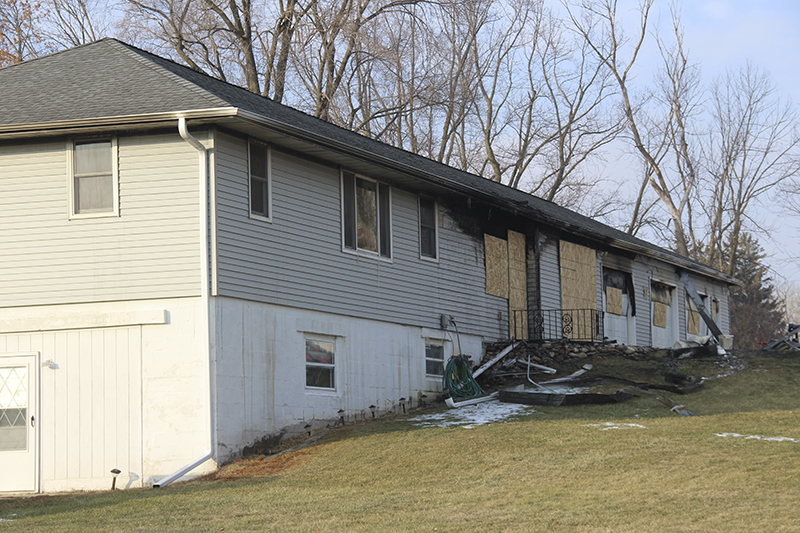 A home at 614 Krikava Road received major damage from a fire Wednesday night that started in the garage and then spread to the house. Sarah Stultz/Albert Lea Tribune

Mitch Evenson was working on his 2019 Dodge Ram pickup Wednesday night when he says some gas pumped out onto the motor, a spark ignited that gas and before he knew it his truck started on fire.

“It burned extremely quickly,” said Evenson, who lives in rural Albert Lea at 614 Krikava Road with his wife, Vicki.

He said he tried to put the fire out, but by that time it was up over the hood of the pickup and into the ceiling in the garage.

He ran to get his wife in the house, and they got out of the house and then quickly moved another car that was parked directly behind the pickup. The fire rapidly spread to his garage and then the house.

“I’ve never seen a fire go so fast,” he said. “It was incredibly fast.”

He said even in just the few minutes his wife was on the phone with dispatchers after calling 911 at 9:11 p.m., they could see the flames start coming out of the garage doors.

When firefighters with Albert Lea Fire Rescue and Freeborn County Sheriff’s Office deputies arrived, the fire had extended from the four-stall garage into the garage attic space and the rest of the attached home.

Evenson reported minor injuries to the left side of his face and ear, along with his right hand.

Glenville and Conger fire departments were called to assist with hauling water and fighting the fire, and crews were on the scene for about four hours extinguishing the fire and looking for hot spots.

Damages total about $220,000, according to a press release, though Evenson said he has not heard from his insurance company yet if the home is a total loss. The house sustained severe damage throughout with the fire in the attic.

“The ceiling is all laying on the floor pretty much throughout the whole house,” he said.

Evenson said he and his wife, who had lived in the house for 40 years, are staying with nearby family until other arrangements are made.

He said even though the house sustained a lot of damage, he was thankful to the fire department for their hard work.

“They did an incredible job,” he said.

The Minnesota State Fire Marshal Division is assisting with the investigation.