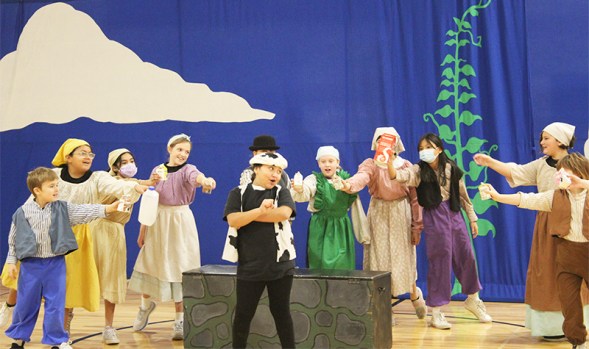 Kassady Palomo rehearses a scene in "Jack and the Beanstalk" with cast members Friday morning at Halverson Elementary School before the actual shows, one for students that afternoon and another for the community that evening. Alex Guerrero/Albert Lea Tribune 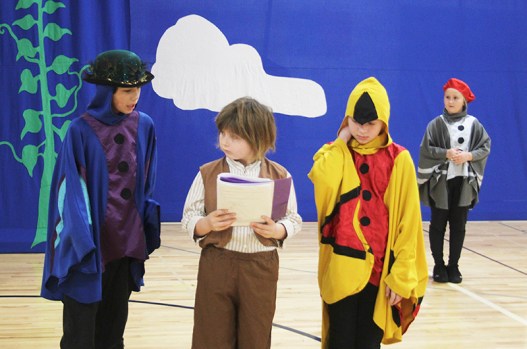 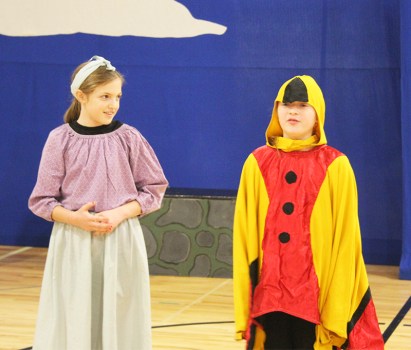 From left, Addison Oakland and Sophie Edwards as Jessie and Toucan practice lines Friday morning before the two shows later that day, one for classmates and the other for the general public. Alex Guerrero/Albert Lea Tribune 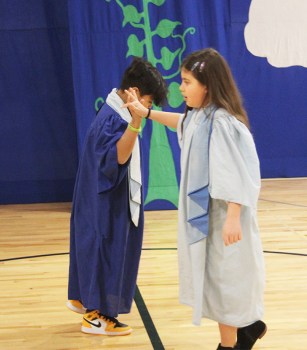 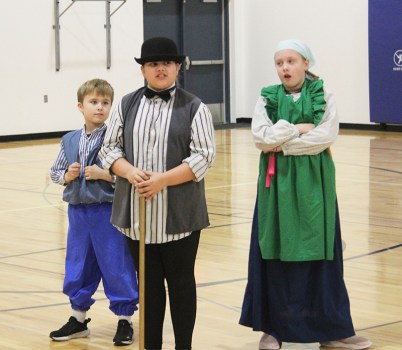 Halverson Elementary school students have been busy this week, as they prepared to perform “Jack and the Beanstalk” with the help of Prairie Fire Children’s Theatre Friday night.

In just a week’s worth of time the students learned about acting, were given parts and then present a play.

“We are a traveling children’s theater,” said William Rutkowski, tour manager of Prairie Fire Children’s Theatre. “That means every Sunday we travel to a new town in the Midwest, from North and South Dakota to Indiana, Michigan and Ohio [and] anywhere in-between.”

Rutowski then meets with students on Mondays and casts them before starting rehearsals. And on Friday costumes go on, students perform and the company packs up before heading out on Sunday.

“Albert Lea is actually one of the few towns where we come multiple times a year,” he said.

For this performance, there were around 28 kids in the cast, and there were slight variations from the original story, such as Jack having a sister, Jessie.

“All of these kids chose to come be part of Prairie Fire Theatre this week, to take the extra time out of their after-school schedule,” he said.

Rutowski played the role of the ringmaster as well as the giant, and his tour partner, Claire Wilson, played both the storyteller and Lucia, the giant’s wife.

“One of my favorite parts is being able to go to a different town every week,” he said. “It’s not the same show every week. You’re meeting new kids — no two kids are the same so they’re not going to give you the same character.

“You have to adapt to these kids, so being on your toes keeps it fresh every week.”

According to Rutowski, Jack and Jessie are in debt with their mother and about to be kicked out of their town when Jack is given beans. And after the duo climb up the beanstalk, they travel to three different worlds, Orchestrania, Featherville and the world of the trolls to rescue treasures.

Prairie Fire Children’s Theatre was started 30 years ago by Deborah Nelson Pick, who had worked for a different company doing a similar thing. But she wanted to do it her own way, so she set up a base in Barrett.

“It’s been going strong ever since,” he said.

Rutowski has been working for the company since graduating in 2017.

“I love the arts, I don’t think it’s in enough schools, and I think this is a great way for schools to really just dip their toes into a theater experience,” he said. “They don’t have to commit a full month and their teachers having to do it. They get to bring these other people in where they’re just doing it all for them.”

It’s also his job to oversee all traveling actors.

“I make sure all of our actors are ready for each week, make sure that they have everything they need and are set up for success,” Rutowski said.

Above all, he wants students to have fun.

“He’s a general in the military and he gets to be loud,” he said.

“Me and my mom talked about it for a little bit, and it’s like … my mom said it will be good if you go in the play, like a musical play,” she said. “This came up and it was a good idea.”

Principal Tonya Franks said she was excited to have Prairie Fire back in the building working with students.

“I think it’s important for the students to have exposure to theater,” she said. “It helps them work on their listening skills, their speaking skills, it incorporates song and dance, cooperation.

“There’s so many worthwhile skills that they learn through Prairie Fire Children’s Theatre.”

This week the theater company ran two shows, the one at Halverson Elementary and a production of “Wizard of Oz” in Morris. Early this fall the company performed at Sibley Elementary with Jeremy Day.

“[The schools] all talk to each other and that’s kind of how the company [performs for multiple schools in the district],” he said.