Richard Anderson, 98, passed away Monday, December 5, 2022. Funeral Service will be held at 11 AM on Friday, December 16, at Bayview Freeborn Funeral Home with visitation one hour prior to service. Burial will be at North Round Prairie Cemetery. 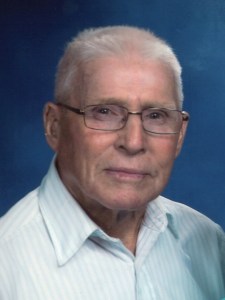 Richard was born on October 13, 1924 to Alfred and Guida (Nelson) Anderson in Freeman  Township. He was baptized and confirmed at Round Prairie Lutheran Church. He graduated  from Albert Lea High School in 1945. He was raised and lived almost his entire life within a few  miles of the home place. He met Lorraine (Thompson) Storvick and shortly thereafter they were  married on August 8, 1969 at Trinity Lutheran Church in Albert Lea. They celebrated their 53rd  wedding anniversary this past year. Dick worked at and enjoyed farming right up until he  retired.

In his free time, Richard enjoyed restoring old cars. He and Lorraine loved riding around in their  vintage Model A. Richard was also an avid motorcyclist, riding up until he was 80 years old. He  enjoyed traveling to Sturgis every year for decades to watch the races. He was known to  participate locally in motorcycle ice racing with a sidecar.

He was preceded in death by his parents; daughter Cynthia Schwemmler; grandson Adam

Erliss and Lyle Buss, Helen and Les Wilhelm and Pat and Aubrey Buser.