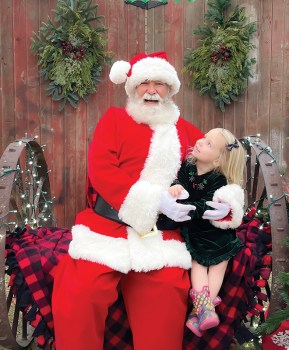 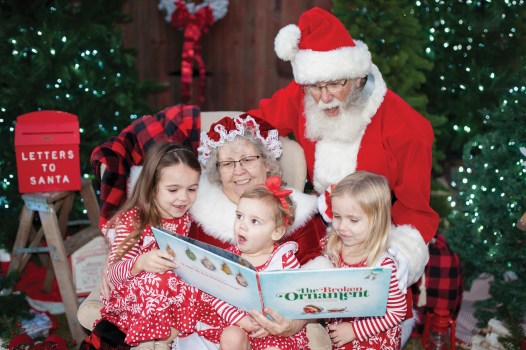 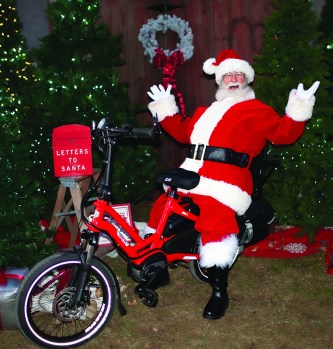 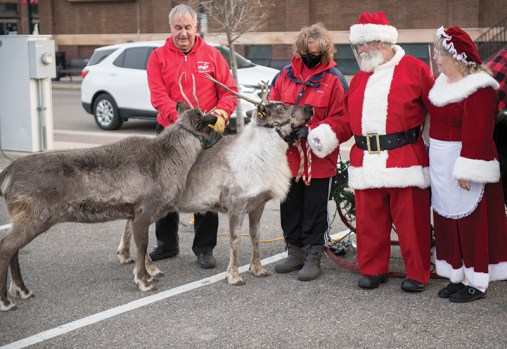 Santa and Mrs. Claus meet 8-month-old reindeers Sweetie and Moon before the start of a drive-thru event in 2020. Photo by Colleen Harrison

It’s not uncommon for performers to use stage names in order to protect their privacy.

For anyone unfamiliar with Santa Bob, he likes to elaborately decorate his front yard for Christmas.

The event started after he and his wife moved to the area after living on a farm.

“My daughter … she said ’Dad, there’s no Santas anywhere, you should do this,’” he said.

So he decided to try it and see if there was a need or desire from kids.

“We set the yard up, and it went crazy with the people just showing up,” he said.

In Yaw’s yard are a Mary and Joseph manger scene, a lighted archway with a bench at the end and a backdrop for photos and a cut-out for kids to stick their heads through. Yaw’s grandchildren dress up as elves and provide hot chocolate to visiting children. He even bought a sleigh for this year.

“It’s just a relaxing yard, no pressure kind of a deal,” he said.

This year he plans to hand out candy canes.

And for him, people having fun was the whole point of the event.

That first year, Yaw and his wife wore masks and offered a hand-sanitizing station at the entrance. If people wanted him to wear a mask or shield, he would. If they didn’t, he would take it off.

Last year also featured hand-sanitizer, and according to Yaw it will be offered again this year.

Yaw will even make toy deliveries Christmas Eve with parents leaving toys outside, which he will then put in his own bag before walking into a house and then handing them out. He’ll then leave and move onto the next house.

The events are free to attend.

“You just come, you bring your camera, we have some special lighting, we can use your camera, take your pictures,” he said.

One of the most challenging aspects of doing this, he said, was finding a reason to talk to older kids and asking them why they could be negative.

“I was disappointed in a whole generation last year,” he said. “A bunch of kids wanted Xboxes, they wanted iPads, they wanted iPhones, they wanted [Apple Watches]. I had to tell them, I stopped them after everybody says something. I said, ‘Wait, I’m Santa. I’m not an IT guy. I build wooden toys — electronics are on your parents.’ And I didn’t want them to go to school going, ‘Santa didn’t get me an iPad.’”

Yaw, who described himself as an outgoing person, said the work was rewarding, and said he thought the want, need and love were out there. Children just needed someone besides their parents to express it.

People can even leave letters in a mailbox.

Anyone is invited to come, and he said older visitors tended to be happy and reminiscing.

Donations are also accepted. Donations will be used toward the next year’s decorations.

“We just did a lights donation, and people donate trees, and I put more artificial trees, put them in the yard and then decorate all the trees,” he said.

In fact, he said while you would be able recognize it now, that will not be the case come December.

Decorating starts in November, before the ground freezes.

Santa Bob’s yard, at 622 W. Richway Drive, is open from 2 to 6 p.m. every Saturday in December through Christmas Eve, though he said it took him until 7 p.m. to get back into his house. Because Christmas Eve is on a Saturday this year, he thought he might wrap up around 6 p.m.

Weather will not deter him from holding these events either.

After the last Saturday before Christmas Eve, Yaw will turn his attention to another project: presents.

“Christmas Eve I start getting phone calls to come to people’s houses to deliver presents,” he said.

The first year three families wanted him to come. Last year there were six.

And be warned, all presents on display in his yard are fake.

“Some people will try to pick them up and take them,” he said. “There’s just a brick in there to hold it down.”

Last year a woman brought a baby to him and unwrapped the child from a blanket.

But she asked to take a picture.

On the other hand, he still vividly remembered the time last year when a girl walked up to him with a letter.

“She was trembling, shaking,” he said. “And she’s the one that said, ‘Are you the real Santa?’

“She turned around and said, “Stop it. I’m talking to Santa.’”

So after, he asked if she thought he was Santa, and she read a letter.

She even asked her parents for some space.

He asked her to read it again, only louder. He then took the letter and had his daughter return it to her parents.

“This year when she shows up — I will see her again, I don’t forget a face, I forget a name but not a face — so if she shows up again I’ll say, ‘Did you get this?’” he said. “Then I will see how that worked out.”

Yaw said he started preparing to be Santa Bob back in June when he started letting his beard grow out.

Above all, his biggest enjoyment from serving as Santa Bob was seeing the excitement and smiles on children’s faces when talking to him.