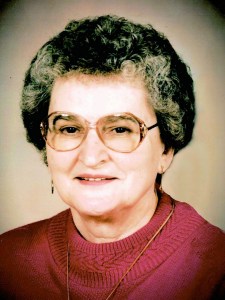 Born on June 1, 1928, near Delevan, MN, she was the daughter of Louis and Dorothy (Linder) Lyneis. She lived near Delavan, Easton, and Albert Lea and graduated from Albert Lea High School in 1947. In 1949, at St. Theodore Catholic Church in Albert Lea, she was united in marriage to Robert H. Dowd. Together, the couple lived in Kiester before moving to Albert Lea.

With her strong work-ethic, Mary worked for the former Wilson & Co. Following her retirement from Wilson & Co., she moved to Des Moines, IA, where she worked at Kentucky Fried Chicken for seven years. Later, she returned home to Albert Lea. A dedicated member of St. Theodore Catholic Church, Mary was a member of the church CCW, the Wilson & Co. Retiree Club, and the Senior Center. She loved to quilt for her children and grandchildren and also enjoyed playing card games with friends and family.

In addition to her parents, Louis and Dorothy Lyneis, Mary was preceded in death by her husband, Robert Dowd; a son, Raymond Dowd; a sister, Ruth Borge, and her husband Robert; two brothers, Floyd Lyneis, Eldon Lyneis and his wife Joyce; two sisters-in-law, Margaret Dowd and Beulah Martinson-Randall and her husband, Hubert Martinson; In-Laws Stanley Dowd and his wife Wanda; and Mary Sue Dowd.

A memorial service will be held at 11:00 AM on Saturday, January 28, 2023, at Bonnerup Funeral & Cremation Services in Albert Lea with Father Kurt Farrell officiating. The family will receive friends at a visitation to be held one hour prior to the service at the funeral home. Inurnment will be in Hillcrest Cemetery and friends are welcome to join the family afterwards for a luncheon at Bonnerup Funeral and Cremation.