Costumes for the Stars 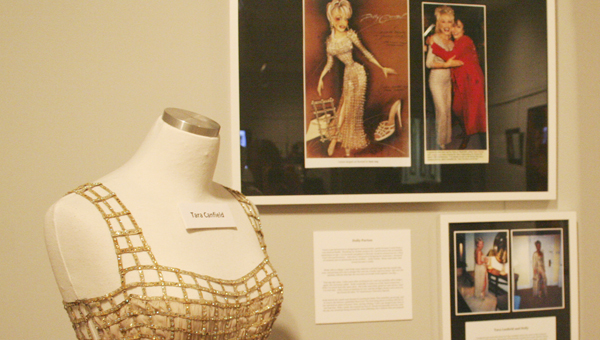 This dress is covered in crystals and was originally made for Stacia Lang’s friend Tara Canfield. When Dolly Parton saw the dress; she asked Lang for a similar one. - Janet Lawler

Everything from the costume sketches from “Star Trek” to exquisite handmade jewelry is on exhibit at the Albert Lea Art Center through Aug. 21.

In gallery one, the work of Albert Lea native and Los Angeles costumer, Stacia Lang, is on display. Officially, Lang’s title is specialty costumer; she creates out-of-the-ordinary costumes for films, everything from space suits to elaborate foam bodies. Lang graduated from Albert Lea High School in 1982 and with the help of art teacher, Peter Flick, was accepted to the Fashion Institute of Technology in New York City. She spent eight years working in New York on various stage plays and ballet companies, including the New York City Ballet and the Joffre Ballet. Plays she costumed include “Into the Woods,” “Legs Diamond,” “La Cage Aux Folles” and “Cats.” In 1990, Lang became the personal designer for the rock musician Prince. She spent three years designing his costumes.

“Her major goal was always to work in film,” said her mother, Barb Lang.

The next big break came in 1997 when Lang moved to Los Angeles to work in the film business, where she remains today. Films she has costumed include the most recent “Star Trek,” “Where the Wild Things Are,” “Superman Returns,” both “Fantastic 4” movies, “Spiderman 2,” “Hellboy 2,” “Monster-In-Law,” “Eragon” and still others. Lang recently finished costumes for yet to be released films “Burlesque” and “Tron Legacy.”

“The gallery is like a retrospective of the last 20 years of my career,” Lang said. “It was a chance for me to get reconnected with my work.”

On receiving the invitation from the Art Center to hold a gallery, Lang said she was more than happy to gather what she could to bring. She said it took her far longer than she thought it would to find, photocopy and frame all of the pieces and compile the DVD, but she said it was worth it.

The gallery features momentos from the films she has worked on as well as a DVD of Lang explaining the work presented in the gallery. There are also sketches from her years spent working for Prince.

“Out of the hundreds of things I have from that time, I tried to pick the cream of the crop,” Lang said.

There are two dresses she designed for a friend, which caught the eye of Dolly Parton who had Lang make similar costumes for her also. There are also miniature figurines that Lang designed completely herself.

Stacia said the largest misconception people generate is the difference between her costume work and design work. A designer designs the costumes, and Lang brings them to life. Whereas with the figurines Lang said she can purely design and let her imagination run wild without having to please producers, directors, designers or actors.

Lang said she prefers visiting with a client to learn what their taste is, like when she talked with Dolly Parton over her pieces. Lang said it’s really exciting to work with big-name actors. Lang costumed Halle Berry for “X-Men 2” and remarked on how nice and sweet she was during fittings.

“But in the grand-scheme of things, the stardome drops away; it’s just a job and you do the best you can,” Lang said.

Lang said opening night for the gallery was exactly what she hoped it would be. She said the people who came were old teachers, friends and visitors who asked questions and allowed her to talk about her craft.

“They were genuinely interested and that interaction genuinely touched my heart,” Lang said.

Lang said one of her most memorable moments was when a 12-year-old girl came in with her sketches and her dream to design.

“She is very good, and I wanted to let her know that her dreams are a reality,” Lang said. “She’ll be able to get the support she needs.”

Support is exactly what Lang believes all young people with aspiring dreams need. Her own supporter Peter Flick, the art teacher in high school who helped her get into the fashion institute, came to opening night to see what his investment had become.

“I’ve always believed in dreaming big,” Lang said. “Don’t sell yourself short or settle on something and put your dreams aside.”

Lang said young people can’t do it on their own, and she would like to thank all of the people who have helped her along the way. Lang also said how incredible she thought the people working for the Art Center are and how impressed she was with the gallery.

“My dream for this exhibit is that people of all ages can come in and see that if you apply yourself, you can watch your dreams come true,” Lang said.

Next door from Stacia Lang’s exhibit is Julia Olson’s “Julia-ry.” Multi-colored stones and gems glint in the soft spotlights of the gallery as they illuminate a large array of necklaces, earrings and bracelets that adorn the display tables. This wide array of jewelry is made of wire and natural stones, including jade, jasper, quartz, turquoise and many more. It is all handmade by Olson who has been making jewelry for a year.

Olson lives in Joice, Iowa, and was introduced to jewelry-making by a friend. She hasn’t stopped since.

“Jewelry-making has become addicting; I like it a lot,” Olson said.

Olson previously has had her jewelry for sale in the Broadway Gift Shop, but when she was asked to do the gallery she said she was excited for opening night. Olson was introduced to the concept of selling jewelry in art centers when she did an art show in Hollandale and was asked to open a gallery in the Austin Art Center. Currently, she has pieces in the Clear Lake, Iowa, welcome center and at the gallery.

“It was just so exciting to see all the people so gracious and complimentary,” Olson said about opening night.

Olson said the first time she makes a piece of one-of-a-kind jewelry she will lay everything out in front of her and keep fitting it together until she likes it. Then she will make two or three just like it, but Olson said she won’t make too many of a single piece because she wants no two to be the same.

“I sit down and just pray,” Olson said about the jewelry-making process.

All of the jewelry in the gallery is for sale, and if a customer would like a different fit or a custom piece Olson would be happy to oblige. After the gallery closes, the “Julia-ry” will still be available in the gift shop.

“(The gallery) gave me a new excitement to continue on with this,” Olson said.

What: “Art in Fashion,” featuring Stacia Lang and Julia Olson