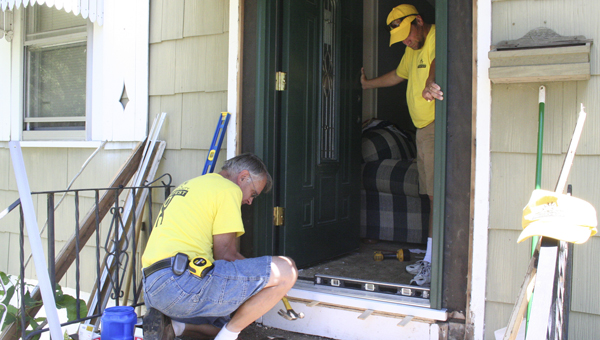 Shinefest volunteers Chuck Avery, left, and Mark Whillock install a new front door at 418 St. Peter Ave. on Wednesday. The project was organized through the Albert Lea Housing and Redevelopment Authority. The homeowner purchased the door and the volunteers installed it. -- Sarah Stultz

The Albert Lea Housing and Redevelopment Authority, along with Shinefest volunteers from multiple churches, are collaborating on a new project in the area.

The project, called “Healing Hearts and Homes,” is giving the HRA and Shinefest the opportunity to help people in Freeborn County who have an immediate structural problem in their home, but who may not qualify for other types of assistance to fix it.

The HRA identifies the homeowner in need of assistance — usually after that person has gone into the office asking for help, but is declined because of income or other means — and then connects the homeowner with the Shinefest group. 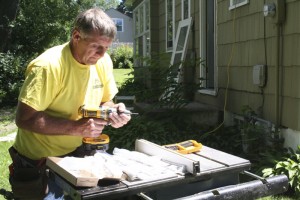 Shinefest is made up of volunteers from 16 or 17 churches who come together several times a year to improve the community.

For these instances, the homeowner purchases the necessary supplies to get the project started, and then volunteers provide the labor.

“I think they’re a fantastic group,” said HRA Redevelopment Specialist Kristi Yost. “We love having them help us out.”

It was the first of about six projects the group plans to do in a year for “Healing Hearts and Homes,” said Shinefest organizer Mark Whillock.

The volunteers said they got involved with it because they enjoy helping other people. “We feel that we can serve Christ by serving others,” Whillock said. “It’s a great way to show our love for Christ. All of us here have a heart for service, helping each other.” 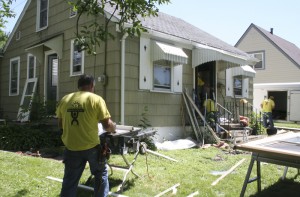 Five Shinefest volunteers install two doors at a home on 418 St. Peter Ave. in Albert Lea Wednesday as part of a “Healing Hearts and Homes” project that is a collaboration through Shinefest, the Albert Lea Housing and Redevelopment Authority and homeowners. -- Sarah Stultz

When the volunteers were installing the doors Wednesday, they said they were short a piece of wood. They went to Home Depot to get what was needed and that ended up being donated to the cause as well.

“It’s been fun to be involved in it,” volunteer Chuck Avery added. “It’s always nice to help somebody out.”

Whillock said future “Healing Hearts and Homes” projects could include the installation of steps and doors or the replacement of an unsafe deck or rotted bathroom floor, to name a few ideas.

The projects do not include heavy construction but are typically projects that can be done in a day or two.

The volunteers are also willing to offer help with financial planning and meal planning if needed.

“It’s teaching them to fish, not giving them the fish,” said volunteer Dale Grotsun.

Contact the Albert Lea Housing and Redevelopment Authority at 377-4375 for more.