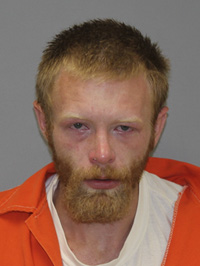 A 26-year-old man who previously served prison time for a burglary in Freeborn County was charged in Freeborn County District Court on Friday with allegedly committing a similar act, this time stemming from an incident at a residence in Glenville.

Vaale is allegedly implicated in a series of burglaries, Walker said, and he was previously convicted of second-degree burglary in 2006.

In this case, he is charged with first-degree burglary. He is alleged to have walked into a home uninvited on 755th Avenue in Glenville where two girls, ages 12 and 14, were there alone.

According to court records, the incident occurred just after 11 a.m. on July 20.

In an interview with a Freeborn County Sheriff’s Office detective, the younger girl stated the man first reportedly knocked and pounded on the front door and then opened the screen door.

Afterward, he walked to the back of the house, at which point the girl and her sister called their father, who told them to lock the back door.

The younger girl said when she went to lock the door, the man was already inside. She smashed her hands against the door to shut it, the record states.

“She said that he said in a strange and timid voice that he just wanted directions,” according to court documents. “He then ‘stomped’ out and got into his car and left extremely quickly.”

Both she and the older girl identified Vaale as the man in a police photo line-up.

Before the Monday hearing when he was reading the charge against him, Vaale questioned why this charge wouldn’t just be a simple trespassing charge.

Walker said during the court hearing that it’s not just trespassing because this is allegedly a recurring event. He alleged Vaale seemed to consistently go from house to house checking knobs with the intent to commit a crime.

He said Vaale is also a suspect in two burglaries in Worth County and additional charges may be forthcoming.

Walker said another woman is also expected to be charged with aiding and abetting tied to this case.

Walker said if Vaale is found guilty of this charge, there’s a presumptive sentence of 39 months in prison.

A first-degree burglary charge carries a maximum penalty of 20 years in prison and a $35,000 fine.

In Vaale’s previous conviction, he reportedly went to a rural residence in a car with a man and woman. Court records state Vaale entered the residence and stole items from it.