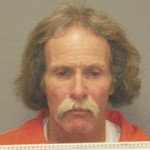 He is accused of sexually assaulting a woman while wielding a knife March 13 and was arrested after the victim called 911 and police responded.
According to court papers, the woman told officers she had finished a shower and was in her room wearing jeans and a towel when Dickey jumped out of a closet wearing only a T-shirt and wielding a knife.
Documents state Dickey told her to cooperate or face death. The court files do not allege an attempt at intercourse, but they do allege pulling her jeans half off and other inappropriate conduct.
Both Dickey’s lawyer, Stephen Erickson, and the Freeborn County Attorney’s Office are recommending a 90-month prison sentence with credit for time already served, according to  the agreement. They are also recommending Dickey be released for good time after serving two-thirds of the sentence. The other one-third of the time would be spent on supervised release.
Dickey may withdraw his plea if the judge does not follow the recommendations.
A pre-sentence investigation has been ordered for Dickey and will be presented at the time of sentencing.
That date has not yet been set.