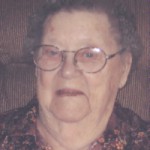 She was born on April 8, 1925, in Jackson,the daughter of Louie and Minnie Frodin.

The family moved and she grew up south of Hollandale. She married Glen O. Helgeson on Feb. 17, 1942, in Lyle. They made their home and raised their family in the Hollandale, Corning area.

Mary was a member of Red Oak Grove Lutheran Church. She enjoyed quilting, baking, gardening and canning and freezing her vegetables.

She was preceded in death by her husband, Glen, in 1992; son, Jerry, in infancy; grandson, Jacob Varner, in 2008; and sisters and brothers.