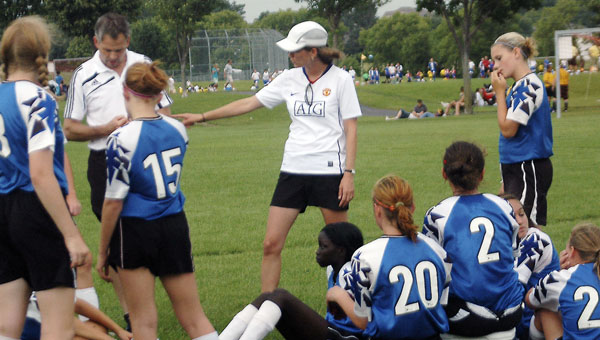 U-13 coach Sophie Ehrhardt talks to her players during halftime Tuesday in Lakeville.

Albert Lea had won nine of 12 in the regular season and had ripped off six straight wins in the postseason.

However, Tuesday’s opponent was one that beat Albert Lea twice this season, as the Albert Lea girls’ soccer team faced Owatonna in the U-13 state tournament.

The Huskies jumped out to a quick lead and held Albert Lea in check the rest of the way as Owatonna defeated Albert Lea 2-0 at North Park in Lakeville.

“I think the girls played real well,” Albert Lea U-13 coach Sophie Ehrhardt said. “Owatonna played a good game, they are a quality side. I’m proud of Albert Lea. I think they had a great season and a great playoffs.”

Minutes after the kickoff, Owatonna put the ball in the back of the net to take a 1-0 early lead.

That score would remain the same until after halftime when Owatonna again scored another goal to take a 2-0 lead and ultimately the game.

Twice the ball hit the post and stayed just on the line allowing the Owatonna goalkeeper a chance to make the save.

Albert Lea also played the game with three play-ups from the U-12 team.

Nadia Leal, Maryah Hernandez and Ashley Krowiorz all played up a class with the U-13 team.

Ehrhardt noted that with their record, the team will move up a division next year to a Classic-2 team that will allow for better competition.

Ehrhardt said the best thing about the season was how the team came together and grew as the season went along.

“They really came together, especially in the last month,” Ehrhardt said. “With a collection of abilities, they really turned into a team. They started communicating on the field and supporting each other. We saw a lot of growth in their skills this season.”

The Albert Lea U-13 girls’ soccer team finished the season with a 15-4 record.