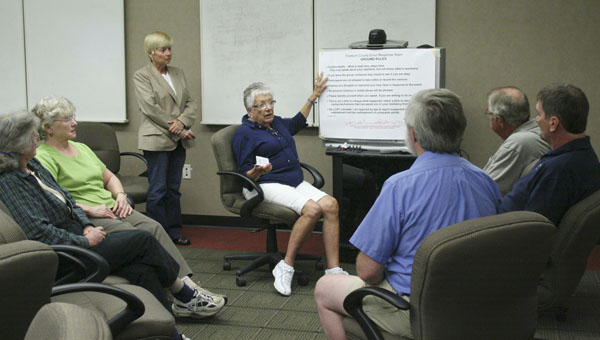 In the aftermath of the Cold Spring school shooting in 2004, Freeborn County resident Chris Elleby heard something that struck a chord.

Crisis Response Team Coordinator Rose Olmsted was being interviewed on the radio about the things she and her team were doing to help those who were suffering from the tragedy.

Elleby said he thought the team sounded like something he’d like to get involved in, so he went home and explained what he had heard to his wife.

“I brought the idea to my wife as a way to give back to the community,” he said.

His wife and their two sons quickly jumped on board.

“I think it’s a feeling of self satisfaction to give back to the community,” Elleby said of how he’s grown since being on the volunteer team. “You can enable them to start healing.”

The team, which started in 1999, is looking for additional volunteers who would like to help community members who have been affected by natural or human-made trauma.

To become a Crisis Response Team volunteer, people need to go through an initial 24-hour National Organization for Victim Assistance training. There is other ongoing training as well.

Upcoming training for new volunteers will be Oct. 2, 9 and 23 for eight hours each day. The deadline to apply for these sessions is Sept. 15.

The volunteers work with people both in and out of the state, supporting people who have been affected by hurricanes, tornadoes, fires, floods, vehicle crashes and shootings, to name a few. Most recently, they were involved with the disaster recovery center at Northbridge Mall for victims of the June 17 tornadoes.

Olmsted said volunteers can be anyone over 13 who is interested in working with people who have experienced trauma. Children under 18 must have parental consent.

Both men and women are needed.

Olmsted stressed that people do not have to have a degree to become a volunteer. The organization provides all of the training.

The Freeborn County Board of Commissioners also recently approved allowing people outside of the county to become a volunteer as long as they can make a one-year commitment.

Volunteers work on an on-call basis around their own personal schedules.

“We all work really well together under one focus — trying to share and enable,” Elleby said.

Volunteer Jerry Rasmusson said he got involved in the Crisis Response Team in 2007, noting that it gives him a lot of satisfaction to help others in crisis.

“You feel good about it,” he said.

“It can be painful but it’s so rewarding when you see the looks on people’s faces and they thank you,” Elleby added.

Rasmusson said it is also rewarding for him to be able to intermingle with others after his retirement in 2002.

The Crisis Response Team provides three major services: Companioning, where a volunteer provides a listening ear and support to traumatized individuals immediately after an event; giving trauma presentations, where a volunteer will give a 90-minute presentation on trauma and its effect on an individual physically, behaviorally and emotionally; and providing group crisis interventions, where a trained facilitator and scribe will help individuals through a process of resiliency, typically somewhere between 24 and 72 hours after the disaster.

Who: Anyone over the age of 13 (parental consent required for those under 18)
What: The team is made up of a group of volunteers trained to go out into the community to be supportive of people who have been traumatized by disaster.
When: Applications are due Sept. 15; the next basic crisis response training will be Oct. 2, 9 and 23 for eight hours each day.
Information: Contact Rose Olmsted, Crisis Response Team coordinator, at 377-5461. 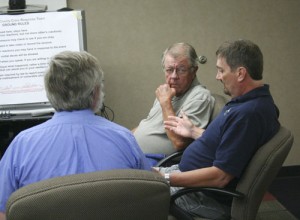 Chris Elleby, right, roleplays as a man who lost his wife in a bus crash during a practice group crisis intervention for Freeborn County Crisis Response Team volunteers on Thursday. Volunteers were in the middle of 24 hours of training. 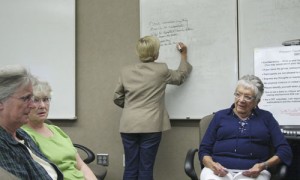