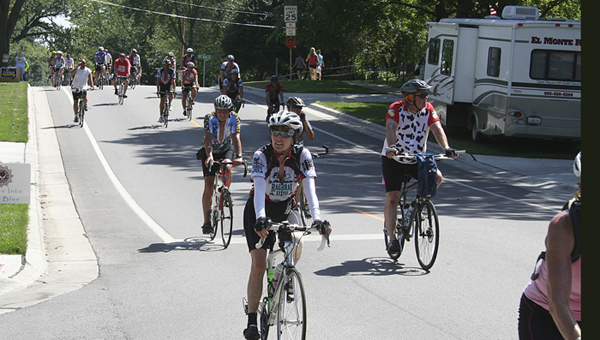 A group of riders near the finish line in the third leg of RAGBRAI in Clear Lake, Iowa. -- Andrew Dyrdal

RAGBRAI riders stop in Clear Lake for food and entertainment

CLEAR LAKE, Iowa — Whether alone, in a group or wearing helmets donning Han Solo’s Millennium Falcon, bicyclists from around the nation paraded into Clear Lake, Iowa, Tuesday, finishing the third leg of The Register’s Annual Great Bicycle Ride Across Iowa.
In its 38th year, RAGBRAI stretches 442 miles across Iowa, from Sioux City to Dubuque. Tuesday, bicyclists rode 60 miles in 90-plus-degree heat, from Algona to Clear Lake, which turned out to be nothing short of a party.
Cruising into downtown Clear Lake on South Shore Drive, riders heard cheers from locals, sitting in their front yards in lawn chairs and surf rock played by Bob and the Beachcombers playing at the lake.

Many riders quickly found the water, filling Clear Lake’s beach and boardwalks. Some found shade or a place to get a cold beverage and air conditioning.
Among the shade seekers was Albert Lea’s Don Mundon, standing under a tree, near the lake, with a bottle of sunscreen clipped to his waistband.
“It’s an adventure,” said Mundon, a 12 year-RAGBRAI veteran who first rode the event in 1976. “You need to do something like this to really appreciate what you have.”
Mundon was riding with friend and fellow cyclist Glenn Lane of Cedar Rapids, Iowa. This was Mundon’s ninth consecutive RAGBRAI, but in late July, this wasn’t his first bicycle ride of the summer.
Mundon logged 1,500 miles on his red, white and blue Trek 2300 so far this summer, both in Albert Lea and in other long distance rides, notably the Tour de Kota, a 476-mile ride from southern South Dakota north, which he rode in mid-June.
His riding mate, Lane, cycles all over the country.
The weather Tuesday was hot, humid and windy, but the wind was at the riders’ backs for much of the day.
The heat didn’t seem to bother the riders as much as the spectators.
“Today was a good ride,” Mundon said. “It was a little windy but it’s always nice to be in the sun.”
Mundon and Lane left Algona at 6 a.m. and stopped in every town, including Wesley, Hutchins, Britt and Garner, to get something to eat and rest. They wanted to get to Clear Lake by noon, and they did.
“It’s not a race,” Mundon said. “It’s a ride, so you kind of want to enjoy it.”
Mundon will join the other over 10,000 cyclists and ride to Charles City today, a 52-mile trek from Clear Lake.
RAGBRAI ends Saturday in Dubuque.