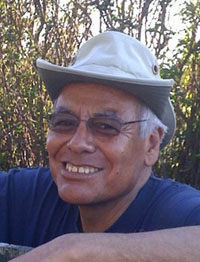 Robert Navarro, age 64, died late Monday evening in his home with his family at his side after a long-fought battle with cancer.
Robert was born in Lyman, Neb., on Sept. 15, 1945, to Victor and Maria (Sanchez) Navarro. He married Debra Kay Gomez on April 17, 1971, in Mason City, Iowa.
Robert was the fifth born of 10 from a hard-working migrant family. He was very proud of his heritage and roots, and his priority was always family. He graduated from Albert Lea High School in 1965, was drafted into the Army in 1966 and discharged in 1972. He was married that same year and enjoyed a life spent playing softball, volleyball, golf, traveling and spending time with friends and family; he especially enjoyed watching his children and grandchildren in their various sporting endeavors. Those closest to him testify to his kindness, warmth, caring, compassion, understanding and overall loving heart. He was once asked what his bucket list consisted of and he was quoted as saying, “just being with my family.” Robert is already truly missed by many as a model brother, son, cousin, friend, father, grandfather and husband.
Robert is survived by his wife, Debra; their three children, Christina (Magnus) Wahlstrom of Minneapolis, Robert Anthony Navarro of Milwaukee, Wis., and Dominique Joseph Navarro of Minneapolis; two grandchildren, Jenna Novak and Emily Vaillancourt; his mother, Maria; eight siblings, Alfonso (Karen) Navarro of Rochester, Josephine (Jesse) Trevino of Elk City, Okla., Leonard (Judy) Navarro of Rosemount, John (Rosa) Navarro of Albert Lea, Ramon (Terri) Navarro of Rochester, Arturo (Terri) Navarro of Rochester, David (Jyl Eppard) Navarro of Kasson, and Richard (Malinda Dyrdal) Navarro of Albert Lea; and several cousins, nieces, nephews and friends.
Robert is preceded in death by his father, Victor; infant brother, Ricardo; father-in-law, Pete Gomez; brother-in-law, Alberto Muniz Jr.; and several aunts, uncles, and cousins.
A funeral Mass will be held at 11:30 a.m. Friday at Pax Christi Catholic Church, 4135 18th Ave. NW, Rochester, with the Rev. Joe Keefe officiating. A visitation will be held at Ranfranz and Vine Funeral Homes on Thursday from 5 to 8 p.m. with a rosary at 7:30 p.m., and also a visitation will be from 10:30 to 11:30 a.m. prior to the service. Interment will be at St. Mary’s Catholic Cemetery in Newry Township/Ellendale in Freeborn County, with military honors.
In lieu of flowers, memorials can be directed to Robert Navarro Memorial Fund.