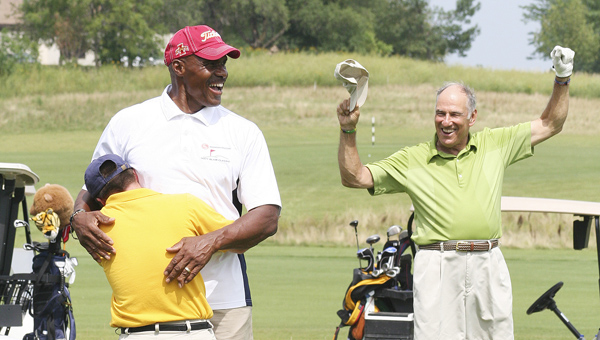 Minnesota sports heroes Frank Quilici and Matt Blair are involved in events helping people with special needs year round. So what makes Sparky stand out?

“The people,” Blair, a six-time Pro Bowler with the Minnesota Vikings said. “Coming out and seeing people excited about Sparky is phenomenal. When you care about something and you show up, that makes the difference.” 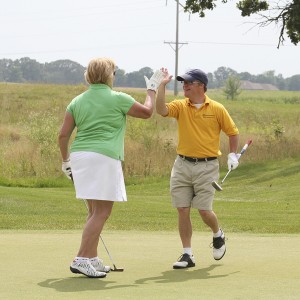 While it’s unknown how much money the golf tournament raised, it’s estimated to be in the thousands.

“It was a huge success,” Sparky event organizer Dawn Kaasa said. “I think this was the biggest crowd we’ve ever had. We got nothing but good comments.”

On the course Thursday, among others, was Quilici, a 22-year member of the Minnesota Twins organization, including time as a second baseman, manager and broadcaster.

Included in Quilici’s foursome was his wife, Lila, Tim Kaasa and Kellen Kaasa, a 28-year-old man with Down syndrome.

Quillici called Kellen, an excellent golfer who can be seen several days a week exercising at Anytime Fitness, an inspiration.

The two looked like old friends on the course together.

“He’s a sharp guy,” Quilici said of Kellen. “There are some wonderful things that he has been able to do as far as golf tournaments.”

Kellen sunk a 12-foot putt on the 11th green to end the group’s round, before getting a big hug from Quilici and his wife.

Back in the clubhouse, golfers were served a dinner and Blair and Quilici spoke.

Blair was introduced by Kaasa as a “Special Olympics supporter.”

He spoke on the hard decisions he’s made in his life and playing career, and how it put him in the position to help others.

“There’s a reason for me to be here,” Blair said. “To help other people. That’s a gift that has been given to me.”

After Quilici spoke, Blair played auctioneer as the famous Sparky jacket was sold to the highest bidder.

The Sparky jacket, a cotton blazer with colorful patches, was once worn by Quilici to the Sparky tournament. He caught so much fire for wearing the ugly garment that he decided to auction it off. It’s been auctioned every year since.

The jacket drew $1,100 from Dick Raimann, of the Wells area. Kaasa said it was the highest bid ever from a single person.

Quilici and Blair both hope to be back next year for the 36th annual Sparky Golf Classic. Their enthusiasm suggests they probably will.