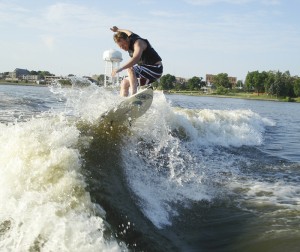 Albert Lea's Jason Miller surfs on a wake behind an inboard boat on Fountain Lake this summer. -- Submitted

Albert Lea’s Jason Miller has been surfing for five years. He rides a hard carving, 4-foot 11-inch surfboard on big waves three to four nights a week, but he’s never rode on the ocean.

No, Miller surfs on Fountain Lake behind a grey Centurion Enzo 230.

“Some people come up and ask us what we’re doing and what it’s called,” Miller said. “Everybody (in Albert Lea) is pretty excited about it.”

Wakesurfing is done behind a boat with an inboard motor, meaning the engine is inside the hull and the propeller underneath the boat.

This boat runs 9-12 miles per hour with all the weight to one side creating a large wake.

The surfer uses a rope to stand up on the board and gain momentum and once a wake forms throws the rope back into the boat and surfs the wave until they run out of room.

Miller starts at the beach and rides across the middle of the lake because that’s where it is the deepest.

Wakesurfing popularity is not only growing in Albert Lea, but across the world, as was apparent at the World Wake Surf Championships held on the Mississippi River July 22-24.

Wakesurfers from nine different countries competed in the event, including Miller who placed second in the Amateur Surf Division.

The competition was scored based on three criteria: tricks, degree of difficulty and intensity. Miller said popular tricks include 360s, ollies and shove-its.

Miller transitioned to wakesurfing after wakeboarding for a number of years.

While wakeboarding, he found that higher speeds and getting more air on jumps was hard on his knees, so he grabbed a surfboard.

“When (wakesurfing came along I got into it,” Miller said. “The stoke is still the same and it’s still a great workout.”

While the sport is not as exciting for spectators as wakeboarding, drivers passing the beach won’t see any large flips or big air, it’s just as much fun for the rider.

“When you make some hard turns and splash the wake, it’s definitely a lot of fun,” Miller said. “You get stoked.”