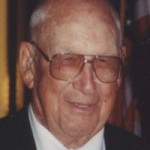 The funeral service for Vernon “Bill” A. Olson of Albert Lea, will be held at 11 a.m. on Friday at West Freeborn Lutheran Church, rural Hartland. The Revs. Dennis Frank and Mark Boorsma will officiate. Interment will be in West Freeborn Lutheran Cemetery. Military honors will be accorded by Albert Lea veteran’s organizations. Visitation will be from 4 to 8 p.m. on Thursday at Bonnerup Funeral Service, Albert Lea, and one hour before the service at the church.
Bill died on Sunday, July 25, 2010, at the Albert Lea Medical Center. He was 94 years of age.
He was born on June 16, 1916, in Manchester Township, the son of Gaylor and Mabel (Thostenson) Olson. He attended school in District No. 21 and then began working for Emil Olson. On Jan. 20, 1942, he was united in marriage to Evelyn M. Christenson in Manchester.
Three days after he was married he was inducted into the U.S. Army, where he served until August of 1945. A decorated WWII veteran, Bill was a medic in Ireland, North Africa, Angio, Italy, and Tunisia. He was one of the first ones in the invasion of North Africa where he was wounded in action. He also was in the first wave into Naples, Italy, on to the Invasion of Anzio. He received many honors for his dedicated service which included: African-Middle East Service Medal, Good Conduct Medal,  Combat Medical Badge, Combat Infantry Badge, a Purple Heart, three bronze stars, the high honor of a silver star, and a citation for gallantry in action in Tunisia.
After his military service Bill and Evelyn made their home in Albert Lea. Two children were born to this union, Gaylin and LaVonne. He and his brother, Walter, started a road construction business in Albert Lea. Due to the physical stress of a war injury, Bill moved on to a new career and he and Evelyn worked in partnership as Tupperware franchise distributors for 31 years. The family business, located in Jackson, Mich., was called Gay-La Sales. After they retired they had lived in Mesa, Ariz., and Orlando, Fla. before returning to Albert Lea. Evelyn preceded Bill in death on June 27, 1998.
On August 26, 2000, Bill was united in marriage to Joyce Furgeson Erickson in Albert Lea. They enjoyed traveling together, one of the most memorable trips was being in attendance for the dedication of the WWII Memorial in Washington D.C. Bill was a member of the West Freeborn Lutheran Church, where he had been baptized and confirmed. He was a life time member of the American Legion, D.A.V. and the V.F.W. He was an avid bowler, golfer and enjoyed hunting and fishing.
Bill will be sadly missed by his family: wife, Joyce, of Albert Lea, son Gaylin (Jane) Olson, Sheldon, S.C., daughter LaVonne (Tom) Admire,  Jackson, Mich., step-children: Joliene (Len) Colby, Champlin, Steve (Laurie) Erickson of Victoria, grandchildren: Travis (Jenny) Olson, Roswell, Ga., Christina (Ben) Gecy, Beaufort, S.C., Angela (Josh) Densberger, Oviedo, Fla., Jeremy (Adrianne) Olson, St. Cloud, Fla., Arica (Jon) Stetson, Stewart, Fla., Tara Admire, Telluride, Colo.; step-grandchildren who lovingly called him “Vernie”: Erin (Andrew) Dale, Blaine, Kristin Colby, Champlin, Angela Erickson, Minneapolis, Christopher Erickson, Victoria; seven great-grandchildren: Hunter and Alissa Olson, Gracie, Caylin and Blakely Gecy, Teagan Stetson and Josie Densberger; sister Helen Schoen (Rudy Phillips) of Albert Lea, brother Walter “Bud”  (Mona) Olson of Hickman, Ky., sister-in-law Cordelia Olson, brother’s-in-law: Bill (LaVonne) Christenson of Albert Lea, Melvin (Donna) Furgeson of Denver; and many nieces and nephews.
He was preceded in death by his parents, his wife Evelyn, brothers: Gerald Olson, Arvil Olson and his wife Inga, Irvin Olson, Wilfred Olson and his wife Ina, Freemont Olson; sisters: Bernice VandanHul and her husband Jack, Irene Johnson and her husband Percy, sister’s-in-law Veniece Olson Madson and Dorothy Olson Waltz.
Bill was a kind and gentle man, always willing to lend a helping hand and put others’ needs before his own. He willingly protected us, as he served our country with courage and heroism. Bill will be greatly missed and fondly remembered by his family and all who knew him.