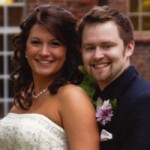 Ushers were Calvin Hendrickson, friend of the couple, of Albert Lea, and Michael Goodwin, brother of the bride.

A reception was held after the ceremony at the American Legion, Albert Lea.

Personal addentants were Jenna Godeke, of Hollandale, and Hillary Miller, friends of the bride, of Albert Lea.

Jaime is a 2007 Albert Lea High School graduate and 2010 Concordia College, Moorhead with a degree in hospital administration and long term care.

A wedding trip is planned for the winter. The couple resides in Council Bluffs, Iowa.