‘Loving God by loving others’ 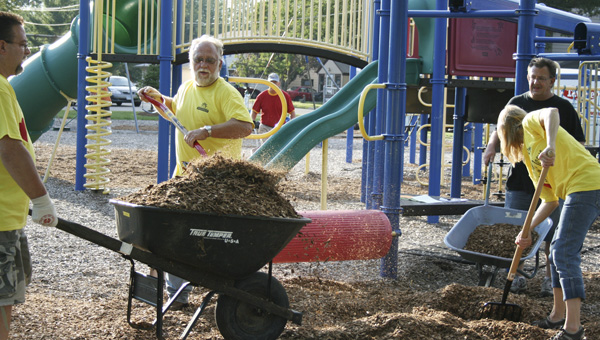 Unified under the common goal of serving God by serving others, members of the Freeborn County faith community bore down on Hawthorne Elementary School Wednesday night during one of several service projects planned for the fourth annual Shinefest Week of Service.

In what was the third of four school cleanup projects planned for the week, volunteers were busy spreading wood chips around the playground, weeding, cleaning up bushes and brush, and cleaning windows.

“It’s a practical demonstration of grace,” said Jim Troe, one of the organizers. “The greatest commandment is to love God and love others. We’re loving God by loving others.” 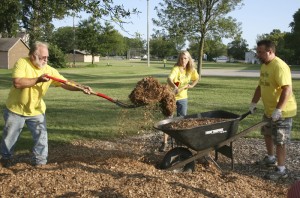 There were about 20 people participating.

Troe said about 40 people volunteered at Lakeview Elementary School on Monday and about 25 volunteered at Brookside Education Center on Tuesday during similar cleanups.

“The idea is to try to create a culture of serving,” he said. “We’re hoping it creates a habit in people so it’s done all year round.”

“I do it every year to help the schools,” Hundley said. “It’s fun, it’s active, and it gets me out of the house.”

His parents were also in attendance.

Pat Goldman, another volunteer, said she was participating because it’s her way of showing her love of Jesus Christ to the community.

“It’s one week of showing when it should be the whole year,” Goldman said.

Volunteers were in good spirits and many had a smile on their faces. 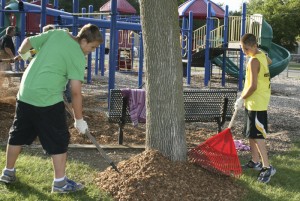 Over the four years since Shinefest began, the program has developed more and more each year.

While the annual Week of Service gathers members of many churches together for one big week, the group is also taking part in smaller service projects throughout the year.

The most recent project developed is the Healing Hearts and Homes project, which allows volunteers to work with members of the community who need basic home repairs, such as new doors, windows or steps.

Remaining Shinefest events taking place this week including the following:

Volunteers for this project will mostly be spreading wood chips around the playground, cleaning up shrubs and bushes and cleaning windows.

Volunteers are asked to meet at the Pelican Breeze boat landing and they will start in the waterway between Albert Lea Lake and Fountain Lake where a lot of trash collects. People can also clean up along the shoreline of both lakes. 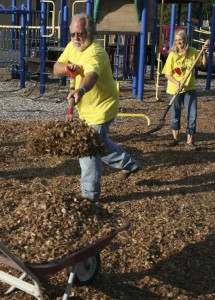 Dale Grotsun piles wood chips into a wheelbarrow Wednesday evening to be dispersed in the playground of Hawthorne Elementary as part of a Shinefest Week of Service school cleanup event. -- Sarah Stultz/Albert Lea Tribune

Ten different bays will be set up to conduct oil changes for families in need.

Participating families are asked to bring their own filter. Anyone who is mechanically inclined is welcome to volunteer.

Any eligible blood donors are invited to participate.

People who have clothing or food to donate can drop it off at this site.

On this day will be the first-ever Community Sew Day, during which Freeborn County quilters and sewers will come together to sew small bags, quilts and dresses for children in need.

Contact Sue Westrum at 383-8977 for questions about this project.