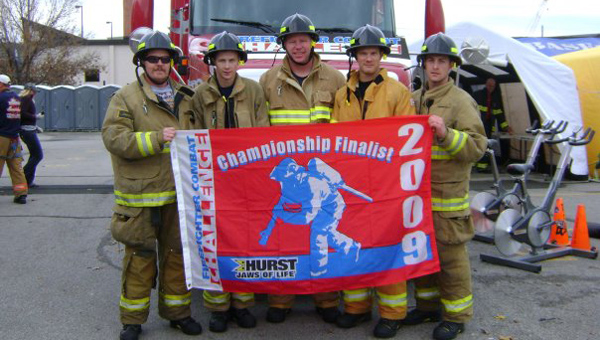 The Albert Lea Fire Department has established an organization called the combat squad that competes in the Scott Firefighter Combat Challenge.

Wearing ‘full bunker gear’ and the SCOTT Air-Pak breathing apparatus, competitors simulate the physical demands of real-life firefighting by performing a linked series of five tasks, including climbing the five-story tower, hoisting, chopping, dragging hoses and rescuing a life-sized, 175-pound ‘victim’ as they race against themselves, their opponent and the clock.

The Scott Firefighter Combat Challenge world championships are the culmination of a season full of hard work, dedication and rigorous training.

Beginning in early spring, the challenge consists of multiple regional events conducted throughout the United States and Canada.

At the regional level, competitors must complete the competition course within a certain time limit in order to qualify for the world championships.

At the world championships, firefighters from all across the globe come to compete for the title “best of the bravest.” The venue changes every year, and this year’s location will be held in Myrtle Beach, S.C.

According to Kurt Wallace, captain of the combat squad, Albert Lea is currently the Minnesota State record holder and the 2009 state champions.

Wallace states, “We have received much support from the community and are currently looking for sponsors to help defer the cost of traveling to these events. That’s where fundraisers like our golf tournament come in.”

The combat squad is holding a four-man best shot golf tournament on Aug. 15 at 1 p.m. at Green Lea Golf Course. There will be a dinner to follow and little mini-games held on the course throughout the tournament.

Wallace also states, “We believe, that as working adults competing at this level, that we set a good example for children of this region, sending the message that it’s not the size of the community that matters, but the level to which you can achieve that is important!”