A little can make a difference 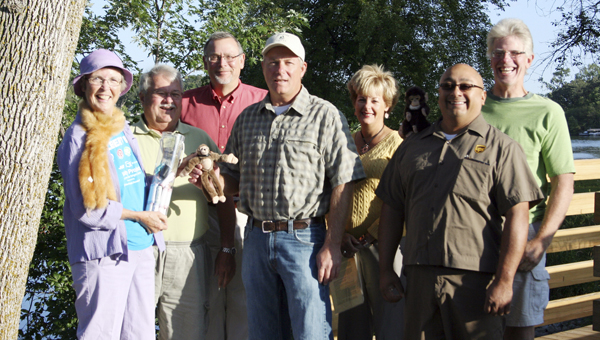 Albert Lean Sara Aeikens proved this month and last that one person can make a difference in the community through patience and working with others.

On July 8, Aeikens set out to find out how she could connect the sidewalks on both sides of the new bridge to Dress Island with an eye-catching design.

After meeting with city staff, she decided she wanted to coin collect the funds to put a stamped brick trim on the edges of the sidewalks on both sides of the bridge. She found out the project would cost about $350 and set out to raise that amount.

While out on her usual errands or while exercising, she’d ask people for loose change. Some gave a few coins, others gave paper bills. Only three people declined.

About three weeks later — after at least 120 people donated to the cause — Aeikens had reached the total needed — plus an extra 3 cents.

On Thursday she presented the funds to city staff, 2nd Ward Councilor Larry Baker, members of the Fountain Lake Sportsmen’s Club and the local Knights of Columbus club, all who have played a major role in getting the island’s bridge replaced. 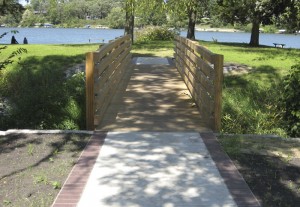 The stamped brick trim on both sides of the new Dress Island bridge is evident here. -- Ed Shannon

Aeikens also gave out a few stuffed monkeys for fun to represent one of the island’s other notable names, Monkey Island.

Baker said Aeikens is an example of all of the giving people in the community who have offered their resources and ideas to make the entire bridge project a success.

“It’s pretty amazing,” he said. “Everytime you turn around, there’s somebody who wants to contribute in one way or another.”

He said he’s thankful to live in such a generous community and is proud to have been involved with the whole project.

“It doesn’t matter who was involved in it,” Baker noted. “From the big money that produced the bridge, to the pennies and dimes and quarters that Sara raised, everybody committed their share of it in order to get it done. Everybody was important to this project.”