A new hotel at Diamond Jo 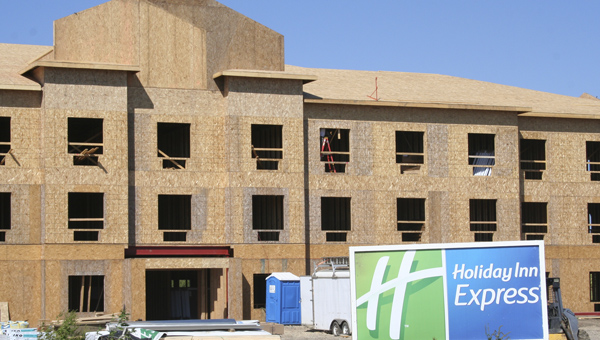 Work is under way on Wheelerwood Road in Northwood, Iowa. This hotel will have special deals for people in the Diamond Jo Players Club. -- Kelli Lageson/Albert Lea Tribune

Holiday Inn Express slated to open in spring of 2011

NORTHWOOD, Iowa — Tourists visiting Diamond Jo Casino or motorists just needing a night’s rest will soon have another option for overnight stays at Exit 214 of Interstate 35 besides the Country Inn & Suites.

A Holiday Inn Express & Suites will open sometime in the spring of 2011 on Wheelerwood Road across the street from the casino. Teresa Nicholson, with Winn-Worth Betco, the economic development office for Winnebago and Worth counties, said the office has been working with the developer on the project.

“The project’s important for the further development at that interchange,” Nicholson said.

A Holiday Inn Express is being built across the street from the Diamond Jo Casino seven miles west of Northwood, Iowa. The hotel will be open next spring. -- Kelli Lageson/Albert Lea Tribune

The hotel is a franchise owned by Northwood Hotel Ventures, based out of the Twin Cities. Carl Kaeding, chief operating officer, said the decision to build a hotel in Northwood was because of the amount of traffic near the casino.

“Holiday Inn Express has good loyalty traffic that we expect to pick up off the interstate,” Kaeding said.

He said the casino has gaming, food and entertainment that will attract visitors and said there’s a fairly large demand for hotel rooms on weekends. Kaeding said the hotel will work on special deals with the casino. Diamond Jo Players Club members will receive special rates on rooms per night, and the hotel and casino staff are still working on specific details.

Amenities at the new hotel will include an indoor pool and hot tub, a small meeting room, an exercise room, a business center and a community room where a free, hot breakfast is served each day. There will be 60 rooms in the hotel. Twenty-three of the rooms will be suites with a couch and mini-bar.

Kaeding also said the hotel will be 30 to 40 percent more efficient than the last hotel Northwood Hotel Ventures built. New windows, extra insulation and a central thermostat that can adjust itself according to what rooms are filled will make the hotel more energy efficient.

“We will consume much less energy per room,” Kaeding said. “It’ll be a really nice hotel.”

Telford said the new hotel will have the brand’s new signage, because of a brand relaunch by the company in 2007. Some goals of the brand are to have a modern, contemporary hotel with efficient and friendly service. Specifically, the lobby area will be decluttered, all signage will show the new logo and all employees will go through a training program to make sure guests get good service.