Aileen Vyonne Skarie Christenson, 88, died as a result of a cerebral hemorrhage on Saturday, July 10, 2010, in Portland, Ore. Aileen was born to George J. Skarie Sr. and Mabel G. (Jorgenson) Skarie of Albert Lea on March 31, 1922. A brother, George J. Skarie Jr,. died in 1989. She graduated from Albert Lea High School in 1940. Her maternal grandmother, Berthe Gulbranson Jorgenson, a Norwegian immigrant at age 19, lived with the family for much of Aileen’s life and had a great influence on her. Aileen was also surrounded by her mother’s sisters and their families and many of them lived within a block of each other in Albert Lea. Her cousin, Gloria (Wolhuter) Carpenter of Decorah, Iowa, and she agreed they grew up more like sisters than cousins. 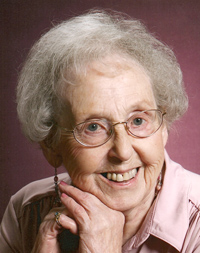 Aileen married Elmer “Chris” Christenson, a schoolmate, in 1942. The eldest child, Michael, was born in Albert Lea in 1945. Gary was born in Muscatine, Iowa, in 1947. Terri Jo was born in Stillwater in 1951. With their family complete, Chris made the decision to quit his radio career and move to Honeywell as an electronics engineer in St. Louis Park in 1953. In 1962, the family moved to Littleton, (now Centennial) Colo. Aileen worked as a secretary and also as an office manager at a physician’s office. She and Chris were active in the Sons of Norway. She became a talented watercolor artist in her retirement. She visited the childhood home of her great-grandmother in Norway. Later she painted a picture of the homestead, “Thomsleven,” and gave prints to many of her family members.

Aileen had the ability to gather and maintain friendships from the many stages of her life. She continued her contact with her best friend from her school days, Barbara Jean (Kleinpaste) of Albert Lea. She had the ability to maintain close relationships with many people despite distances and despite health and personal challenges. Aileen leaves us with the lessons of resilience in times of challenge. To follow her example we would turn inward and focus on our spirituality during times of loss and turn outward with friendly and loving eyes towards others, everyone a potential friend.

A funeral will be held at the Holy Trinity Lutheran Church in Littleton, Colo., on Sunday, Sept. 19, at 1:30 p.m. Inurnment will be at Fort Logan National Cemetery Sept. 20, at 11 a.m. Arrangements by Bullock Mortuary of Englewood, Colo.

Donations can be made to the Holy Trinity Lutheran Church or to the Vesterheim Norweigan-American Museum in Decorah, Iowa.