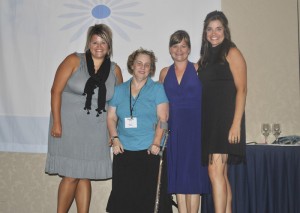 Jennie Wondra, a resident of Albert Lea, has been an independent business owner of Daisy Blue Naturals for less than four months. This year, she made the commitment to attend the company’s national convention, which is held in Minneapolis.
Daisy Blue Naturals recognizes their independent consultants with awards ranging from Top in Sales to Top in Team Building, as well as our First Time Attendees and Achiever’s Awards.
This year, Jennie Wondra was recognized with our Fast Start Achievement Award. Not only did she start her business quickly, she holds the record for the largest launch party which was over $1,500 in sales.
“It is with great joy that we recognize Jennie for her achievement.  She is a phenomenal woman, and I know we will continue to see great things from her,” states Jena Thompson, the president and CEO of Daisy Blue Naturals.
Daisy Blue Naturals is a local company that was founded in 2001 by Chemist Jena Thompson, who developed the very first products with a focus on truly natural, safe ingredients. Daisy Blue Naturals’ core purpose is to make a difference in every life they touch, through their products and life changing opportunities. To learn more about Daisy Blue Naturals, please visit their website at www.daisybluenaturals.com.