The funeral service for Alida Wilhelmina Kuiper will be held at 11 a.m. Monday at Bonnerup Funeral Service Chapel, Albert Lea. The Rev. Robert Albers will officiate. Visitation will be one hour before the service at the chapel. Interment will be in the Graceland Cemetery. 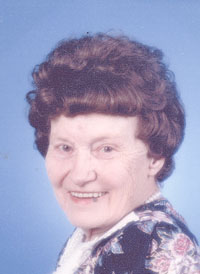 Alida was born in Prince Albert Saskatchewan, Canada, on July 13, 1914, the daughter of E.W. and Wilhelmina (Gemmink) Mulder. She graduated from Albert Lea High School in 1932. She was married to John Ter Avest on April 21, 1937. He died Nov. 26, 1937. She was later married to Harm Kuiper. Alida was a member of the Hollandale Reformed Church.

Alida had been a hospital care worker. She enjoyed quilt making and embroidery work.

Alida enjoyed and was especially proud of her grandchildren and great-grandchildren. She was a active person until her death, completing a quilt with her daughter the day of her hospitalization.

Her generous heart was well known, especially to the children in her life.