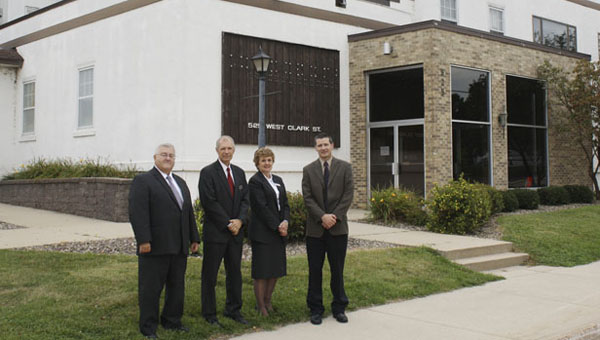 Albert Lea Medical Center officials announced Friday they have accepted a donation of the former Bonnerup Funeral Service building, 525 W. Clark St., to be used as a training center for medical center staff.

The gift was facilitated by Naeve Health Care Foundation as a charitable contribution.

Dr. Mark Ciota, CEO of ALMC, said in a press release that the location of the facility works well for the medical center and provides much-needed space for staff activities.

“Bonnerup’s gift reflects its commitment to ALMC, the neighborhood and the community,” Ciota said.

Initially, the building will go through one level of renovations so it will be ready by mid-October to serve as a training center for ALMC staff as they convert to a new electronic medical record, he said.

Once the initial training for this record is completed, the building will go through more extensive remodeling to become a permanent training and education center, the press release stated. It will also house some of ALMC’s departments, though he doesn’t know which ones yet, Ciota said.

The building, across the street from the large ALMC staff parking lot, has been empty since Bonnerup Funeral Service moved to its current location, 2210 E. Main St., in June 2009.

Steve Merfeld, funeral director and co-owner of Bonnerup, said the company was pleased to make the donation.

“Given ALMC’s expansion in recent years, particularly in the neighborhood of our former location, it seemed logical to gift them the building and property,” Merfeld said in the release. “We know it will have a positive impact on the neighborhood and our community.”