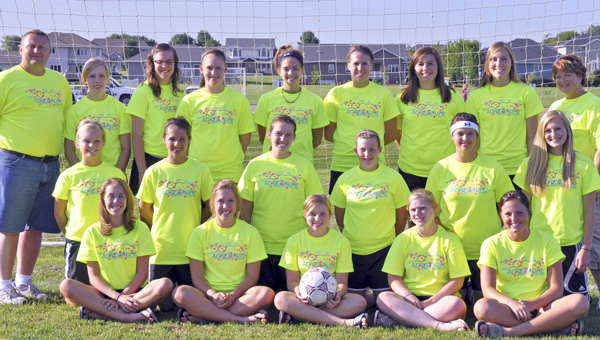 The Albert Lea Adrenaline has completed its summer soccer season with an 8-2-1 record. They competed in the U-17 Southwest Girls League and had 21 girls on the team.

The Adrenaline had a young squad for a U-17 team, and had a very successful season in many ways. They worked together to develop teamwork, game skills, conditioning and to prepare for Albert Lea High School fall soccer.

Offensively, Albert Lea tied for the highest scoring team in their district with 27 goals scored. Just as impressive, defensively, they were the second lowest in goals allowed. The Adrenaline finished the season strong, tying Rochester, a team they had lost to earlier in the season.

They felt fortunate that the team had no injuries, and are ready for the fall season.

“We look forward to improving next summer,” coach Pam Nelson said. “We have enjoyed this great group of hardworking girls.”

Come out and watch this explosive team this fall at Hammer Field, Sept. 13 at 7:00p.m. Fill the stands night includes a hot dog and drink in the price of your ticket.