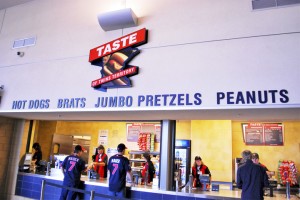 It’s easy to become enamored with Target Field. The limestone on the top of the dugouts, the refreshing lack of ads on the outfield walls, the Minneapolis skyline looking over right field.

But what about the food?

The Twins’ new ballpark has something for everyone. Whether on a budget, a season ticket holder or someone who would rather sit and enjoy a meal at a table rather than at their seat, you’re covered.

The first thing you’ll notice on the way to your favorite vendor is the wide concourses.

Twice as wide as the Metrodome’s, the walk to a Big Dog is less congested and you can still see the field.

The vendor you will run into most often is Taste of Twins Territory.

Each Taste of Twins Territory stand sells one of the four Schweigert hot dogs made in Albert Lea.

If you are still mourning the loss of the Dome Dog, which was discontinued when the Twins did not renew their contract with Hormel, try the best shot at its replacement, the Big Dog, which can purchased with a bag of chips for $5.50.

If you still want a taste of Albert Lea but are on a budget, the Twins Original Dog can be found at sections 114 and 311, and costs only $3.

Another popular option is State Fair Classics. A vendor which, like its name states, offers food you can find at the State Fair.

The most expensive item, but the most popular at State Fair Classics according to cashier Lind Mrozinkski, is walleye on a stick.

A cheaper treat from State Fair Classics is the corn dog, which costs $3.50.

The corn dogs are golden brown, bordering on black, feature a plump, juicy hot dog and hold its own against fair corn dogs, though it’s not as good.

For those looking for something zestier, try Tony Oliva’s Cuban sandwich, located at vendor stands throughout the stadium.

The sandwich is $9 with chips and worth the money.

The sandwich is filling and one during the third inning should keep you satisfied for the remainder of the game.

If you get to a game early, and want to have a beer or more restaurant type food before the first pitch, look for the Town Ball Tavern or Hrbeck’s.

The Town Ball Tavern is located on the second level and has the Murray’s steak sandwich and popular appetizers. You can catch other MLB games on one of five TVs and check out photos of townball parks around Minnesota.

Hrberk’s, located at section 114, is closer to the field and has a wide range of beer, burgers and appetizers. The restaurant also acts almost as a shrine to the ex-Twins first baseman, with photos and jerseys hung on the walls from all the levels of his baseball career.

Contrary to the stigma stadium food receives, Target Field nosh can be bought on a budget. If you are looking to spend a fortune, you will find ways to do that, too.