Beetles are most numerous of insects on the planet 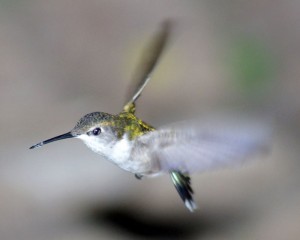 A hummingbird in flight. -- Photo courtesy of Julie Bronson

“Everything is nearly copacetic. I was supposed to have Monday off but I had to go in. Everyone was looking for me. I thought I was indispensable until I discovered that the only reason they were looking for me was that I had accidentally left with the key to the restroom. Boy, were they glad to see me. I just went to the dentist’s office to get a tooth pulled. Phil Eng told me to open my mouth and he was fixing to go to work, when I asked him how long the procedure would take. He said that it should take only about five minutes once the anesthetic took effect and I wouldn’t feel a thing. That sounded good until I asked him how much it would cost.”

“Phil Eng told me that it would cost $250. I grumbled a bit. I do that sometimes. I’m good at it. I told Phil Eng that it was a crime to hold a man captive for five minutes and then charge him $250.”

“He gave me the Phil Eng special. I got my money’s worth. It took him 20 minutes to do the extraction.”

Insects are the most common form of life on the planet and beetles the most numerous of the insects. J.B.S. Haldane was a 19th century British biologist at a time of great scientific and religious controversy brought about by Darwin’s theory of evolution. Someone asked Haldane, “What has your study taught you about the Creator?” Haldane replied, “He had an inordinate love of beetles.”

“How many broods do barn swallows have each year?” Barn swallows incubate the clutch of four to seven eggs for 13 to 17 days and feed the altricial hatchlings for 18 to 22 days until they leave the nest. Barn swallows frequently raise two broods per year. Female barn swallows prefer males that have the longest, most symmetrical tails and a darker chest color. Early European colonists thought that swallows spent winters buried in mud. The killing of barn swallows for feathers to use in the millinery trade was one of the issues that led to the founding of the Audubon Society and the passage of the Migratory Bird Treaty Act. Many cultures believe that swallows nesting on a home brings good luck.

“How many broods do house wrens have each year?” The typical clutch is five to eight eggs that are incubated by only the female for 12 to 13 days. One male may serve two females. The young fledge in 12 to 18 days. They have usually two, sometimes three broods. The preponderance of a house wren’s diet is animal matter — spiders, beetles, caterpillars, grasshoppers, true bugs and ants.

Avoiding perfumes and using repellents made with DEET can lessen the number of mosquito bites. A study in The New England Journal of Medicine in 2002 found that sprays with even small amounts of DEET protected wearers for up to five hours, while wristbands and sprays made with citronella last only minutes.

President Barack Obama had just begun a Rose Garden statement when a rodent dashed out of the bushes just outside the Oval Office.

The critter scampered past the podium carrying the presidential seal and ran into bushes to the left of the president. From the photo I was sent, it wasn’t a rat or a mouse. It was a vole. People call them “meadow mice” or “field mice.”

The meadow vole is a common rodent that lives in grassy fields, woodlands and marshes. It is five to seven inches long and weighs an ounce or two. Its color varies from grayish-brown to reddish-brown to blackish-brown. Voles make nests in clumps of grass, using dry grass, sedges and weeds. From the nests, they build runway-like tunnels beneath the grass and plants. A meadow vole’s diet includes grasses, sedges, seeds, flowers, leaves, roots of shrubs and saplings, bark, tubers, bulbs and occasionally insects. They particularly enjoy clover and plantain. They are prodigious feeders and multipliers. Voles don’t hibernate and do not typically store food. They eat constantly. Voles concentrate on green vegetation in the summer and switch to grains, seeds, and bark the remainder of the year. If a vole feels threatened, it will stamp its hindfeet, much like a rabbit. Voles normally make noise only to threaten another vole. Bullfrogs, cats, crows, foxes, hawks, herons, owls, raccoons, shrews, skunks and snapping turtles prey upon voles.

It’s a movie like you have probably not seen before. Three avid birders compete to spot birds. It’s “competitive birding.” In 1998, Mark Obmascik followed three men who spent a year searching for the most bird species they could find in North America. Such an endeavor is called a Big Year. The winner saw 745 species. Obmascik documented their journeys in a book titled, “The Big Year: A Tale of Man, Nature, and Fowl Obsession.” The last I heard, Jack Black, Owen Wilson and Steve Martin will be in the movie scheduled for a 2011 release.

“As a beauty I am not a great star, there are others more handsome by far. But my face, I don’t mind it, for I am behind it. It’s the people in front who get the jar!” — Anthony Ewell

“I love to think of nature as an unlimited broadcasting station, through which God speaks to us every hour, if we will only tune in.” — George Washington Carver.