A week before she was scheduled to stand trial on allegations of abuse of residents at Good Samaritan Society of Albert Lea, Brianna Broitzman on Monday pleaded guilty in Freeborn County District Court to three counts of disorderly conduct by a caregiver as part of a plea agreement.

Each count represents a different victim.

The agreement, entered by Broitzman’s lawyer, Larry Maus, and the Freeborn County Attorney’s Office, is classified as an Alford plea. It asserts innocence but admits the prosecution has enough evidence to convict, usually for more severe charges. 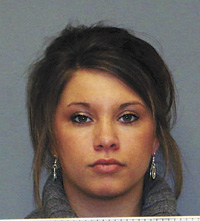 The agreement came three hours after Broitzman’s scheduled pretrial hearing. Multiple families of the alleged victims waited in the courthouse lobby and courtroom as the agreement was being negotiated.

“We’re very glad that we did get a plea of guilty,” said Jan Reshetar, a family member of one of the victims. “It’s something that we’ve needed for a long time.”

Broitzman, 21, is one of six young women who faces charges tied to allegations of abuse of residents at the nursing home from January through May 2008. She and co-defendant Ashton Michelle Larson have been charged as adults.

The remaining four young women were charged as juveniles with failure to report suspected abuse because they were under 18 at the time of the alleged abuse.

Four of those counts were added Friday.

Maus said Broitzman is pleading guilty to three counts of disorderly conduct by a caregiver in exchange for the remainder of the charges to be dismissed. Any future criminal charges will also not be able to be filed in this case.

Maus said Broitzman recognizes evidence the Freeborn County Attorney’s Office could have used at her trial, including an incriminating statement to police in May 2008 and the testimony of some of the other prosecutor’s witnesses.

“There is indeed a high probability of conviction,” Maus said.

Under the agreement, Broitzman will be on probation for two years. Jail time and fines will be left up to the discretion of Freeborn County District Court Judge Steve Schwab.

She faces a maximum penalty of one year in jail and a $3,000 fine for each charge.

“We’ll leave it in the capable hands of the court,” Reshetar said. “We’ll be glad when it’s over.”

Talking with reporters after the hearing, Nelson and Maus said they both thought the negotiation process was a difficult one.

“There’s something that touches our hearts when we’re dealing with these types of victims,” Nelson said.

He noted, however, that he thought the plea was an appropriate one, pointing out that the 15 counts against Broitzman included three or four different ways of charging the same allegations.

Nelson said he has not heard of a forthcoming plea agreement in the Larson case. He said her case is similar, yet different, and involves some different alleged victims.

For the time being, he is planning to move ahead preparing for her trial. The date and location of this trial have not yet been announced.