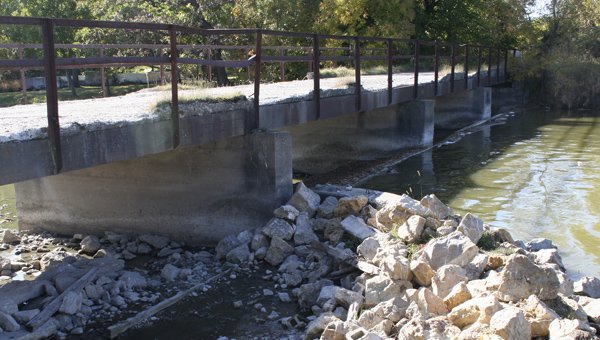 A rock pile assists the dam at the outlet of Albert Lea Lake, as seen in this 2008 photo. -- Tim Engstrom/Albert Lea Tribune

ST. PAUL — Two representatives from the Shell Rock River Watershed District appeared before the Lessard-Sams Outdoor Heritage Council Wednesday afternoon to ask for more than $2.5 million for purchase of the land around the Albert Lea Lake Dam.

“It was a big day, but we had a great response from the council members,” Behnke said.

If the council picks the project to list with its recommendations, the state would buy the land, specifically 257 acres, from the current landowner, Greg Jensen, and then the Minnesota Department of Natural Resources would eventually own and manage the land. The price per acre for this purchase would be about $10,000.

One council member specifically asked Henschel if he thought that was a high price for an acre of land.

“We’re in the process of appraisal,” Henschel said.

He said the watershed district’s attorney, Matt Benda, and staff are working on getting the price appraised. Another council member then asked if the district would rebuild the dam if the council did not approve the project or recommended a smaller amount of money than requested.

Henschel said because the dam will be replaced even if the council didn’t approve funding or as much funding as requested, the district would find other ways of funding the project. He also said that rebuilding the dam will positively be part of the larger restoration project, but that the district would appreciate funding from the state. Council members also asked some general facts about the dam. Henschel said as far as he knows the dam was built in the 1800s.

Another council member asked whether the dam had been assessed for safety and studied for fish passage and biological impacts.

“It is in very poor shape,” Henschel said. “We do have major funding to reconstruct a new dam that would allow for fish passage.”

The funding Henschel talked about was the Shell Rock River Headwaters Restoration Project in conjunction with the U.S. Army Corps of Engineers. He clarified for the council that the money being requested was specifically for ownership of both banks of the first 1.4 miles of headwaters on the Shell Rock River, the dam, as well as woods and aquatic habitat.

The watershed district made an information packet for all the council members and included numerous letters of support from outdoor and environmental organizations, including the DNR, as well as from area government entities.

The next step is to wait until the council convenes again and decides which projects to fund on Sept. 16. If council members decide to support the watershed district’s project, they will include the project in their recommendation to the Minnesota Legislature, where it would have a good chance of being included in a bill, according to Judy Erickson, a legislative consultant who was with the watershed district representatives Wednesday. The council could choose to recommend less than the amount requested, too. The council anticipates recommending $86 million in conservation projects to the Legislature.

Though the watershed district asked the council for $2,576,500, just one small part of a bigger project, the Shell Rock River Headwaters Restoration Project. The project is officially called the Freeborn County 206 Aquatic Ecosystem Restoration Project. It will restore almost 3,000 acres of Albert Lea Lake and other wetlands. Fountain Lake and the Shell Rock River will benefit from reduced sediment inputs, but the project does not affect either water body significantly. The Albert Lea Lake watershed is about 157,000 acres in size and is located entirely in Freeborn County. A federal grant has been secured for $4.8 million and local funding and in-kind services will produce about $2.68 million to fund the project with an estimated cost of $7.48 million.