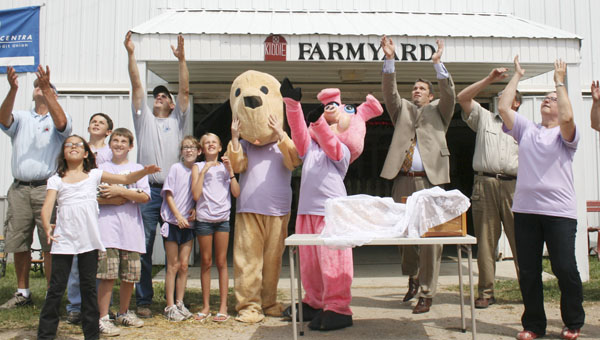 People participating in the ribbon cutting ceremony at the Kiddie Farmyard release doves to commemorate the new renovations. The building was built in 1921 and has new floors among other renovations. -- Janet Lawler/Albert Lea Tribune 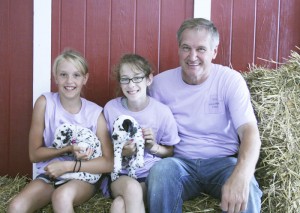 From left are Mallory Geesman and Doser; Bryn Nelson and Dawn; and Steve Haukoos. Geesman and Nelson handle dalmatian puppies. This red storage barn in the back of the Kiddie Farmyard was one of the new additions which Haukoos supervised. -- Janet Lawler/Albert Lea Tribune

The Kiddie Farmyard was built in 1921, and this year got all new floors, 20 new livestock pens, a storage container and new overhead interior lights. The $15,000 worth of renovations was overseen by the building’s superintendent, Jane Haukoos. 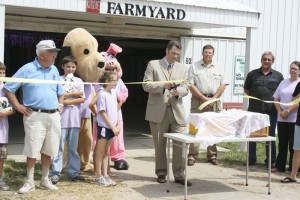 “This project was a long time coming,” Haukoos said.

Haukoos has been superintendent of the building for 10 years and wanted to thank everyone who helped with the farmyard and donated by buying a brick. The back wall of the Kiddie Farmyard building has a wall of bricks that can be purchased for $50 to $5,000 to support the ongoing operation of one of the fair’s biggest attractions for children.The Kiddie Farmyard features everything from peacocks and ostriches to chicks and other baby animals, including puppies, kittens and baby pigs.

Haukoos said the Conger 4-H Club came to help renovate and set up the building, which they used as their community-pride project. When it was judged, it won gGrand Champion, something Haukoos said she’s proud of. Haukoos said her husband, Steve, and their daughter worked hard on the farmyard, and the ribbon-cutting is a very sentimental moment for them.

“For 10 years I have collected every idea every kid who has helped with this has had for the farmyard,” Haukoos said. “I told them someday it would happen, and it did.”