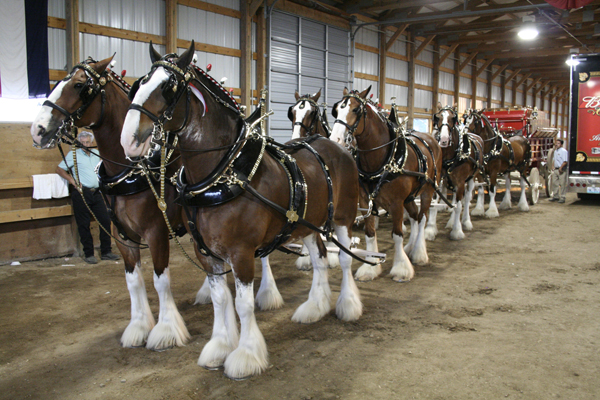 The throngs of people at the Freeborn County Fair move out of the way when eight Budweiser Clydesdales come walking their way pulling a beer wagon, two men and a Dalmatian.

The Clydesdales were at the fair this week, thanks to local distributor Krieger Beverage Co. People filled the barns in the northwest section of the fair to see the geldings.

Clydesdales are a draft horse originally bred in Scotland to pull heavy loads. They stand about 18 hands high — that’s 72 inches — and weigh about 2,000 pounds. Despite their enormity and strength, the horses are known for their docility, too. 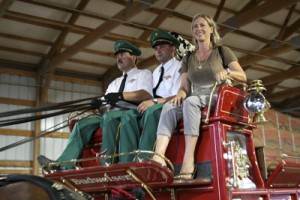 A woman gets a lucky ride on the beer wagon.

The Budweiser Clydesdales are the ambassadors for the Anheiser-Busch beer company based in St. Louis. Teams of horses and men are based in the cities of St. Louis; San Diego; Meniffee, Calif.; Merrimack, N.H.; and San Antonio. Each team has 10 horses. Eight horses pull the wagon, with two as backups.

The hitch that visited the Freeborn County Fair this week has a staff of six men and a Dalmatian, said Mark Fisher, a member of the crew. It is based out of St. Louis.

The team was in Chisholm last week and will be in Des Moines, Iowa, next week.

The boxes in the Studebaker wagon, Fisher said, are not actually carrying beer. They are just for show.

Still, the story of the Budweiser Clydesdales does involve hauling beer.

August Busch Jr. told his father he purchased a Lincoln to get him to come outside the brewery in St. Louis. Once there, August Busch Sr. saw the team of six Clydesdales pulling a red, white and gold beer wagon. It was a gift to celebrate the repeal of Prohibition.

The Clydesdales carried the first case of post-Prohibition beer from the brewery down Pestalozzi Street in St. Louis. 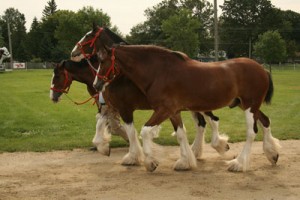 After that, August Busch Sr. loaded the Clydesdales on a train for New York. They toured the East Coast, even presenting beer to a former governor of New York who had been instrumental in the repeal effort and to President Franklin Roosevelt at the White House in Washington, D.C. The tour was a promotional success.

The polka tune plays without lyrics while the Clydesdales pulls the wagon. If people don’t hear the clip-clop of the hooves first, they hear the tuba in the tune emitting from speakers on the wagon.

When traveling, the horses stay overnight in their stalls either in the place at which they are to be featured or the staff will make arrangements for an overnight location to set up the stalls, Fisher said. The staff members, of course, stay in hotels.

Three tractor-trailers carry the crew from one city to the next.